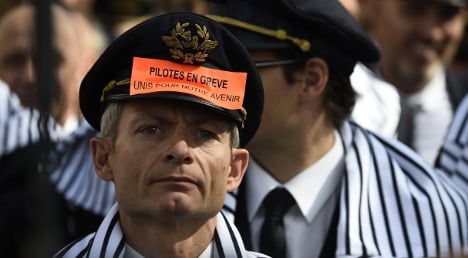 Air France has moved to end a crippling air strike by proposing scrapping its plans to expand its low-cost subsidiary into Europe. Photo: Eric Feferberg/AFP

The airline proposed "the immediate withdrawal" of plans to expand an offshore-based Transavia Europe, but said it would pursue the development of Transavia's services in France.

It called for pilots to return to work "immediately", to end a dispute that has already stretched to ten days and cost Europe's second-largest flag carrier €20 million ($25 million) a day.

"With the withdrawal of the Transavia Europe plan, there is no longer any reason to strike because there can be no fear of outsourcing," the airline said in a statement signed by Air France-KLM chief executive Alexandre de Juniac and his Air France counterpart Frédéric Gagey.

The proposal "allows us to end this destructive conflict", they said.

"We call on the striking pilots to return to work immediately."

However on Thursday morning the striking pilots refused to budge and brushed off calls to return to the skies after 11 consecutive days of strike action.

The leading pilots union SNPL said the strike would continue "for the moment", saying they would be making a counter proposition. Talks are set to resume on Thursday afternoon.

The government meanwhile welcomed Air France's proposal and said it was "now the responsibility of the pilots to end the strike".

Many Air France pilots, who earn up to €250,000 a year, are angry at the plans to develop budget carrier Transavia, which currently serves holiday destinations across Europe and the Mediterranean.

The dispute has led to the grounding of more than half of Air France flights, while services at French regional airports have been hit even harder.

The union action is "again dragging a company into the red," said MEDEF vice-president Jean-Francois Pillard.

While proposing to put the European expansion on ice, Air France said it would maintain its plans to develop Transavia France "in competitive economic conditions".

"Our Transavia project is 100 percent a project for France," the airline said.

It promised that the project would create more than 1,000 jobs in France, including 250 pilots' positions.

The announcement capped a fraught day in which Transport Minister Alain Vidalies told a radio station that the Transavia Europe plan had been abandoned, only for the airline to deny the claim and say negotiations were ongoing.

Prime Minister Manuel Valls has warned that the strike is putting Air France's future in danger.

He said earlier Wednesday that "if abandoning or postponing the Transavia project allows for a solution to the crisis, it is the right solution".

Not all the airline's employees back the strike.

Hundreds of Air France workers, including pilots, rallied in front of the company's headquarters on Wednesday demanding that the striking pilots get back to work.