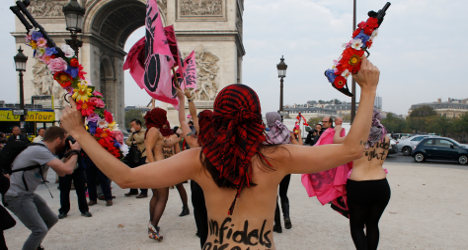 The protesters urged French and American citizens and all those who are threatened by Isis jihadists to show your hostility towards the organization. Photo: Thomas Samson/AFP

Bemused tourists looked on as around ten members of the militant feminist group launched the protest at the top of the famous Champs-Elysées avenue with the words “infidels speak out” emblazoned across their bare chests.

Brandishing a fake AK-47 and Uzi covered in flowers in front of a pink banner, one of the women shouted: “French and American citizens and all those who are threatened by Isis jihadists, show your hostility towards Isis’s ideas.

“Don’t be scared of being politically incorrect or intolerant. It’s only by criticizing them publicly that we can destroy them. Infidels, rise up against Isis.”

The protest comes days after an Isis spokesperson urged all Muslims to kill French and citizens of other countries that have joined the US-led coalition to fight the jihadist organization, branding the French “dirty” and “spiteful”.

However France's interior minister insists that the country is "not afraid."

On Monday an Algerian group linked to Isis threatened to kill a kidnapped Frenchman within 24 hours unless Paris halts air strikes on the Islamic militants in Iraq. France, however, has vowed not to negotiate.

Femen are constantly hitting headlines in France and around the world for their controversial protests.

Earlier this month the radical feminists were acquitted of all charges related to their topless protest at Notre Dame Cathedral, which drew worldwide attention. However, some security guards were given suspended fines of €300 to 1,000 ($390 to $1,300) for manhandling three of the activists when evicting them from the famous Paris landmark in February 2013.

Earlier in June, on the same day that President Vladimir Putin was due to arrive in France for D-Day anniversary events, the protest group destroyed the Russian leader's statue in a Paris wax museum.