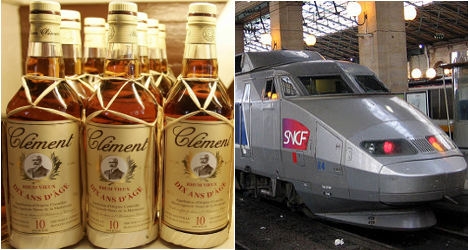 The strike is in defence of colleagues who face a disciplinary hearing for drinking alcohol at work. Photo: Pascal Pavani/AFP, OliverN5/Flickr

Normally strikes in France are centred around pay disputes or reforms but on Wednesday rail workers on Paris’s Transilien suburban commuter trains are rallying together in support of two colleagues facing a disciplinary hearing for sipping rum during working hours.

The disciplinary hearing comes three months after a two-minute video was published showing a group of rail workers having an informal gathering in February 2013, with rum punch and snacks at one of the most important train switching stations in the Paris region.

The clip, which was filmed by an SNCF employee, shows workers chatting about the potency of the rum rather than paying attention to the control panel, and appears to capture a narrowly avoided accident.

Because the controller made a mistake, a train was directed the wrong way, where it could have ended up on an already occupied track. The whistleblower, who is filming his colleagues without their knowledge, asked: “I guess the rum is going to your head, huh?”

Since the clip was published in June six staff have been disciplined following an internal investigation.

Two other employees, an operational manager and a supervisor, will appear before a disciplinary council on Wednesday afternoon.

In a press release cited by the paper, the CGT union denounces the “employers’ repression” of staff and criticizes “management’s dogmatic position dictated by [SNCF CEO] Pepy”.

Moreover, the union insists, “no one finished their glass” and the alcohol in the rum used to make the crêpes at the gathering evaporated in the pan.

As a result of the strike, which was announced by the SUD-Rail, CGT and UNSA unions, just half of trains on the J and L lines of the train network will be running, Le Parisien reported.

The strike, which is set to last 24 hours, is expected to affect tens of thousands of commuters.