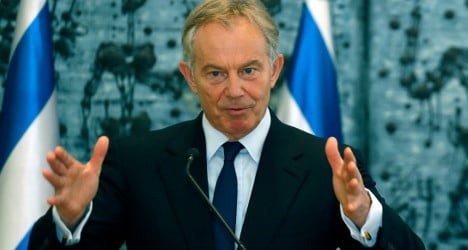 Tony Blair got a little criticism from a top French leader. Photo: AFP

France's foreign minister hit out Monday at Tony Blair's statement that sending ground troops to fight the Islamic State group should not be ruled out, saying he was not "best placed" to comment.

The former British prime minister, who sent troops to invade Iraq in 2003, wrote in an essay on the website of the Tony Blair Faith Foundation that Western powers should not rule out ground engagement "in the future if it is absolutely necessary".

Asked about Blair's statement, Laurent Fabius said France — which has launched air strikes in Iraq as part of a US-led coalition to fight IS jihadists controlling large areas of the country — would not be sending ground troops.

"And where Iraq is concerned, I'm not sure that Mr Blair is the best placed to give out advice," he told BFMTV from New York, where he will be taking part in the annual UN General Assembly.

Experts say the 2003 Anglo-American invasion of Iraq that toppled the regime of dictator Saddam Hussein played a part in turning some of the country into a training ground for jihadist groups including Al-Qaeda in Iraq, from which IS was eventually born.

Fabius said the aerial operation over Iraq would be "a long-term affair".

"If France, like many other countries, has taken a firm stance, it's because we are defending ourselves."