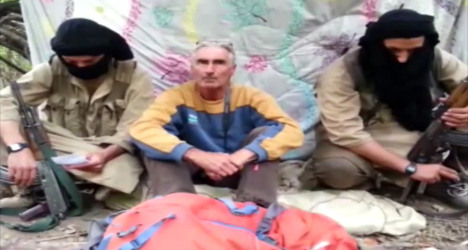 Paris vowed Tuesday it would not negotiate with jihadists who kidnapped a French hiker in Algeria, as the local army raced against time to find him before his threatened execution.

The kidnapping was claimed by Jund al-Khilifa (Soldiers of the Caliphate), a group linked to Islamic State jihadists that has vowed to kill the hostage by Tuesday night if Paris did not stop air strikes in Iraq.

As the deadline loomed, some 20 truckloads of paratroopers also joined the search, a witness said, and police set up roadblocks along the highway that works its way through the mountains.

France opened an official enquiry into the kidnapping, which took place on Sunday in the heart of Algeria's Djurdjura National Park, whose dense forests, deep gorges and picturesque lakes were once a key draw for tourists.

However, in the nineties it became a sanctuary for Islamists who would later swear allegiance to Al-Qaeda, and security forces have been unable to dislodge them.

Jund al-Khilifa was formed recently after splintering from Al-Qaeda in the Islamic Maghreb (AQIM), which experts say has raked in some $120 million (€93 million) in ransom payments in the previous eight years.

Paris — which has denied accusations it pays ransoms — refused to be cowed by the threat against Gourdel, and Prime Minister Manuel Valls insisted the country would press on with air strikes alongside the United States.

Valls told French radio there would be "no discussion, no negotiation and we will never give in to blackmail. Even if we are, of course, very worried after the authentication of this video."

"If we give in, if we retreat an inch, we will be handing them victory," Valls told Europe 1 radio while on a visit to Germany.

The French government confirmed as authentic a video posted by the group showing the white-haired and bespectacled hostage squatting on the ground flanked by two hooded men clutching Kalashnikov assault rifles.

The video surfaced shortly after IS issued a statement urging Muslims to kill Westerners whose nations have joined a campaign to battle the jihadist group, in particular Americans and French.

The United States has built a broad coalition of more than 50 nations to fight the IS organisation, after the jihadists seized large parts of Syria and Iraq and committed widespread atrocities, including beheadings and crucifixions.

On Friday, France conducted its first air strikes in Iraq.

"These strikes, this engagement will of course continue," promised Valls.

The country "cannot be scared of those who threaten it in this way," he said, adding: "I want to convince our compatriots … that we have never been up against such a threat, in France and in Europe."

However, while the United States launched strikes against the Islamic State jihadists in Syria, France has said it would limit its strikes to Iraq.

In a YouTube video posted on Monday night, Jund al-Khilifa, which has pledged allegiance to IS, threatened to kill Gourdel within 24 hours unless Paris halts its air strikes.

Gourdel lives in the southern French city of Nice and works as a mountain guide. He arrived in Algeria on Saturday and was seized a day later while hiking with Algerian friends.

The 55-year-old is a passionate photographer who has travelled widely to countries such as Morocco, Jordan and Nepal.

"I have always wanted to capture these incredible landscapes. It was in the Moroccan Atlas mountains that I began to progress. I wanted to bring back images of the people who lived there," he explains on his professional site.

Gourdel's family expressed hope for his freedom and spoke of their anguish at his kidnapping.

"We learned with great pain of the kidnapping of Herve Gourdel, our father, our partner, our son, our brother and our very dear friend," said a family statement sent to AFP.

"Herve, we can't wait to see you again and we are waiting for you," the statement added.

His 82-year-old mother told the Express newspaper the kidnapping was "an ordeal for us". She last heard from her son on Sunday.

"Everything was fine, he said he was going for a two-day hike and that it would be hard to reach him," she said.