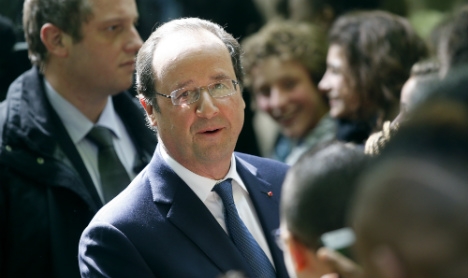 The GCF faces a key test at the UN summit as it looks to the leaders of the industrialized world to stump up billions of dollars to fill its underflowing coffers.

"France will contribute up to $1 billion in the coming years," Hollande told the summit hosted by Secretary General Ban Ki-moon.

Previously only Germany had come up with a substantial commitment, pledging around $1.0 billion dollars in July.

The South Korea-based fund was born out of the UN climate summit in Copenhagen in 2009, when developed countries made a political commitment to mobilize $100 billion annually for developing countries by 2020.

The GCF was set up to channel funding from wealthy to poorer nations, helping them shift their development pathways towards a greener track and shore up defenses against climate peril.

The fund currently has around $55 million in its coffers, while Christiana Figueres, the head of the UN Framework Convention on Climate Change (UNFCCC), has called for an initial capitalization of $10 billion by the end of the year.

The news comes even though France is trying to cut its government budget and is struggling financially after nine straight months of rising unemployment that's now hit a record level – estimated at around 3.4 million.