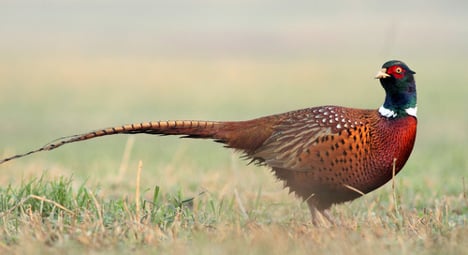 6,000 birds were left homeless as a result of the floods. Pheasant photo: Shutterstock

As a result the aviary’s 6,000 bird residents have been left to fend for themselves in the village’s flooded streets and fields.

Around 1,500 of the birds drowned, their corpses littering gardens in the village, while the remaining pheasants and partridges took refuge where they could.

But not all the town’s residents have taken kindly to the refugees.

Here's a video on the pheasant invasion (in French only):

Since their break for freedom several of the fowl have reportedly been captured by hunters and residents have reported hearing gun shots.

Quoted by Midi-Libre, André Fesquet, a local farm owner complained of hunters shooting the birds on his land.

“There are people who go around the farm. It’s dangerous. The gunshots were five metres away from me,” he said.

“In Cévennes these kind of people are called ‘viandards’ (meat eaters). It’s despicable – there are no words to describe it.”

Meanwhile, Philippe Bastide, the owner of the aviary, is desperately trying to recapture the escaped birds, which sell at €10.50 each.

“I don’t know what I’ll do. As the days go by they become more and more wild and they don’t come back,” Bastide told Midi-Libre.

This isn’t the first time unusual animals have appeared unexpectedly in a French town.

In June the discovery of two separate boa constrictors slithering around the south-eastern town of Bourg-de-Péage sent its residents in panic mode.

Authorities suspected foul play and launched a probe into fears that someone intentionally set the potentially dangerous creatures loose.