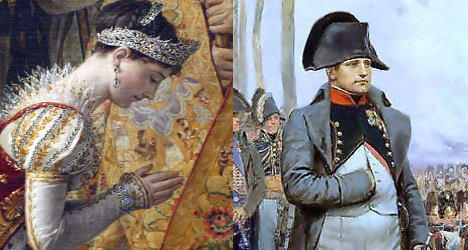 Josephine and Napoleon's marriage document went for a whopping sum at auction.

By the time the hammer fell on Sunday at a suburban Paris auction house, the final sale price of the marriage document for Napoleon and Josephine had beaten expert estimations by four times.

In the end it was the privately-owned Museum of Letters and Manuscripts that offered the winning bid of €350,000, which rose to €437,500 with commission and fees at Maison Osenat auction house.

The museum is already home to some 136,000 manuscripts, including the original scroll of Marquis de Sade's notorious work “120 days of Sodom”.

The marriage document dated March 8th 1796, was signed by the future Napoleon I and his fiancee Marie Josephe Rose Tascher de La Pagerie, or Josephine, the Viscomtesse de Beauharnais.

The wedding itself took place the next day, and the contract was registered in Paris on March 18th.

Despite history recording their passionate love affair, the document shows that the star-crossed lovers could also be very practical.

The marriage certificate states that the pair will "in no way be responsible for the debts and mortgages of the other" and that there will be "no common property" between them.

At a previous auction in 2007, a love letter to Josephine written before they were married, sold for more than five times the pre-sale estimate.

In the letter, sold at Christie's in London, the future French leader had written: "I send you three kisses – one on your heart, one on your mouth and one on your eyes."

The marriage was annulled in 1810, after the couple failed to have children.