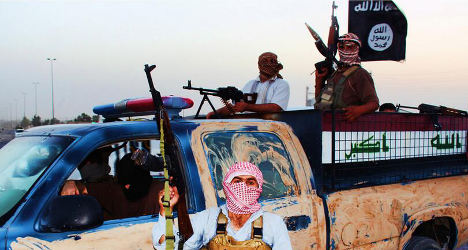 Isis fighters have put out a call for the kiling of 'dirty, spiteful' French. Photo: Weyleyat Salahuddin/AFP

In a chilling threat distributed via social media in several languages, Isis urged Muslims around the globe to kill French people, Americans and nationals of any country in the coalition targeting the Islamic extremists.

“If you can kill a disbelieving American or European – especially the spiteful and filthy French – or an Australian, or a Canadian, or any other disbeliever from the disbelievers waging war, including the citizens of the countries that entered into a coalition against the Islamic State, then (do so),” Islamic State in Syria and Iraq said.

Later in the 42-minute message he adds: “If you are not able to find an IED or a bullet, then single out the disbelieving American, Frenchman, or any of their allies.

"Smash his head with a rock, or slaughter him with a knife, or run him over with your car, or throw him down from a high place, or choke him, or poison him.”

Responding to the threat, Interior Minister Bernard Cazeneuve said in a televised statement: "France is not afraid. France is prepared to respond to their threat."

He added that security forces were "fully mobilized".

"This is not the first time France has been threatened by terrorist groups who attack the values of tolerance … respect for human rights and democracy, which France has upheld through its secular history," Cazeneuve continued.

The threat comes just days after France launched its first airstrikes against Isis militants, boosting the US-led efforts to unite the world against the jihadists.

In a statement from the office of François Hollande on Friday, the French President said: "This morning at 9.40, our Rafale planes carried out a first strike against a logistics depot of the terrorist organisation Daesh (Isis).”

The statement said the target was in north-eastern Iraq but did specify exactly where, only adding: "The objective was hit and completely destroyed."

France, as well as Britain, had already sent aircraft into Iraq's skies for surveillance missions but Friday's strike was its first offensive operation against the jihadists, according to AFP.

On Friday it was reported that US aircraft had carried out more than 170 strikes since August 8th but President Barack Obama has been keen to build a broad international coalition.

The bombing campaign was launched to protect Iraqi Kurdistan from advancing jihadists and attempt to help the autonomous region's troops retake the ground they lost.

France is increasingly concerned about the number of citizens travelling to fight in Iraq and Syria who could return and pose a threat on home soil.

The lower house national assembly on Friday approved an "anti-terrorism" bill which will usher in a travel ban on anyone suspected of planning to wage jihad.

Cazeneuve said the bill would also allow for security services to be "better armed".

"Even if there is no such thing as zero risk, today we are taking 100 percent precautions."