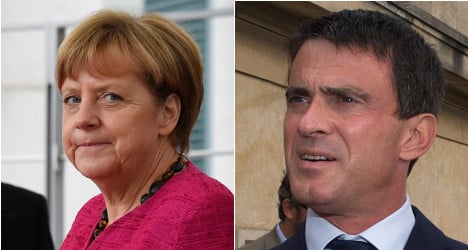 France and Germany are meeting on Monday to talk about spending. Photo: AFP

Socialist Valls, on his first official visit to Berlin since taking office in late March, will seek to convince conservative Merkel that Paris is committed to economic reform despite recently saying it will miss another deficit target.

France, struggling with zero growth and record unemployment, earlier this month conceded it won't get its ballooning budget deficit down to the EU limit of three percent of gross domestic product until 2017.

But Valls is also set to renew a push in talks with the leader of Europe's biggest economy for more pro-growth policies and stimulus spending to boost the stuttering recovery in the eurozone.

Valls reiterated Saturday that "we have to change things in Europe … We need a reorientation because the eurozone is falling behind in terms of growth and inflation".

"Germany is a great nation that we respect," he said, but "our message has to be heard. Germany must assume its responsibilities."

France's economic woes have reheated an old debate whether Germany should do more to bolster growth in the eurozone, a criticism dismissed by Berlin which argues it's already pulling its weight.

The unpopular government of President Francois Hollande and Valls is being challenged by the far-right National Front, which made huge strides in recent local and European parliamentary elections.

By contrast Merkel, now in her third term, is enjoying consistently high approval ratings as the economy of export power Germany is gradually recovering amid low unemployment.

Germany's centre-left Frankfurter Rundschau daily said Valls would face a similar reception in Berlin as he did in France's National Assembly where his government last week narrowly survived a confidence vote.

"Confidence will be granted to him by gnashing one's teeth. But behind closed doors, the tone should be quite different," it said.

Claire Demesmay of the German Council on Foreign Relations think tank said that Berlin understands it is counterproductive to publicly criticise France.

"It's been very well understood that when Germany raises its voice, it mostly serves the National Front," she said.

Valls previously came to Berlin in mid-April, just after his appointment, but the trip was to attend a meeting of the centre-left Social Democrats and he did not meet Merkel, who was on holiday at the time.

This time around Valls is being received with military honours ahead of a working lunch, to be followed by a joint press conference at 1115 GMT.

Valls then flies to the northern port city of Hamburg to visit a plant of European aircraft manufacturer Airbus, a symbol of Franco-German cooperation.

He also meets Vice Chancellor and Economy Minister Sigmar Gabriel, head of the centre-left Social Democrats who are the coalition partners to Merkel's conservatives.