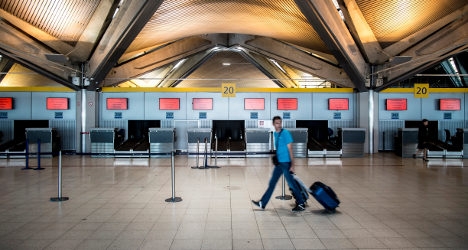 Air France announced on Sunday that only 41 percent of flights would be operational on Monday. Photo: AFP

Air France pilots on Monday rejected a last-ditch management attempt to end the longest strike at the airline since 1998 that is costing up to 20 million euros ($25.7 million) every day.

The main pilots' union dismissed as a "smoke screen" the chief executive's offer to freeze the development of a subsidiary budget airline that management sees as vital to compete in the cut-throat aviation market.

The management proposal "is nothing but a smoke screen that offers no more guarantees than previous offers and does not solve any problem," the SNPL union said in a statement.

Air France chief executive Alexandre de Juniac said earlier Monday that this was the "last offer" to break the deadlock that has grounded on average 60 percent of the French flag carrier's fleet.

The pilots are on strike in protest at the airline's plans to develop Transavia France, which serves holiday destinations, primarily in the Mediterranean.

They fear the airline will attempt to replace expensive Air France pilots, who can earn up to 250,000 euros ($321,000) a year, with Transavia pilots, who are paid considerably less.

De Juniac offered "to suspend the plan to create Transavia subsidiaries in Europe until the end of the year" in order to have "a deeper dialogue" with pilots, but insisted the overall project could not be called into question.

"The pilots' strike has had disastrous consequences for customers, employees and the company's finances," the airline said in a statement.

Unions have threatened to extend the strike — already the longest in 16 years — until Friday unless their demands are met.

Air France has made concessions — notably an offer to limit the Transavia fleet to 30 planes compared with 37 originally planned — but to no avail so far.

"This strike is becoming interminable," said Jean-Claude Delarue, president of a travellers' federation.

"You have to ask yourself whether Air France will end up losing market share because travellers will end up going elsewhere," said Delarue.

The government has called several times for an end to the strike, with Prime Minister Manuel Valls warning that the image of the eurozone's second largest economy was at risk.

Transport Minister Alain Vidalies warned over the weekend that "the fate of the company could be at stake."

"The low cost (arena) is not a choice, it's an obligatory move, that's reality. I think pilots are fully aware of this," he told French radio.

Management has sent an email to its pilots to try to put an end to what it said were attempts of "intimidation" against pilots who were continuing to work.

"Air France management will not tolerate any misdemeanour and will initiate steps necessary to punish those who engage in such acts," read the email, obtained by AFP.

The company also wrote to its passengers to express its "frustration" and "unhappiness". It asked customers who have booked a ticket before September 26th to delay their trip or change their flight free of charge.

In an apologetic message to its frequent flyers, the wider Air France-KLM group has said its aim was to offer "competitive" fares and Transavia was

Throughout the strike, the atmosphere at airports has been remarkably quiet, as the company has been warning travellers in advance that their flights are cancelled.