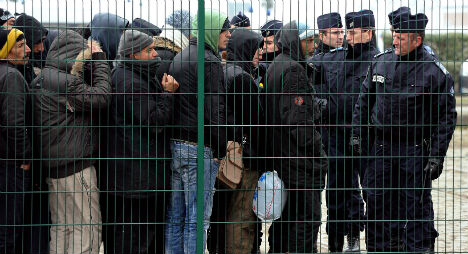 French Interior Minister Bernard Cazeneuve said London had agreed to contribute up to €15 million (£12 million, $19 million) to a fund to help deal with the problem after Calais's mayor threatened to close the busy cross-Channel port earlier this month.

Hundreds of migrants desperate to get to Britain have twice tried to storm the perimeter of the port in the last three weeks, with mayor Natacha Bouchart blaming Britain for not doing enough to deter them.

Cazeneuve claimed London had recognised its "responsibility to take urgent and long-term measures to solve the crisis", which has dogged Calais for years.

He hailed the agreement, which he said took three weeks to negotiate with his opposite number, Home Secretary Theresa May, as "an important step", in a statement Saturday.

Bouchart said it was the first time Britain had agreed to help with the cost of dealing with migrants, hundreds of whom were sheltered in a centre in Sangatte until it was closed by former French president Nicolas Sarkozy — then interior minister — in 2002.

"It is official recognition of what we have had to live with for 12 years," she said.

The port's operator said the €15 million promised by London matched the cost of a plan for a huge new secure lorry park, higher alarmed fences and new security gates it had proposed three days ago.

France has long called on Britain to help pay for security measures at the port, where police say up to 1,500 migrants, mostly from Sudan and Eritrea, are trying to slip into trucks bound for Dover.

But British Immigration Minister James Brokenshire made no reference to money when he confirmed that "practical solutions have been agreed", in a statement Saturday, instead stressing closer cooperation against organised crime gangs behind people smuggling.

Brokenshire sparked fury in Calais two weeks ago when he offered to send France the security barriers used at the NATO summit in Wales.

Cazeneuve said the money will be used over three years to help further tighten security at the port, to reinforce checks and look after vulnerable migrants.

Jean-Marc Puissesseau, of the port's operator CCI, said the British aid could help pay for new four-metre tall fences around the port fitted with sensors to counter "repeated mass assaults" migrants have recently tried on the port.

More British immigration checkpoints would be built in the port, he told a press conference, as well as a huge new lorry park.

But a French police union spokesman, Gilles Debove, said he doubted that the measures would "limit the flow of migrants, nor lessen their determination to try to pass the winter in England".

Cazeneuve said the agreement was just a first step towards dealing with the problem, including providing a day centre for migrants and "accommodation for vulnerable people," as well as trying to limit the "exodus of migrants crossing the Mediterranean".