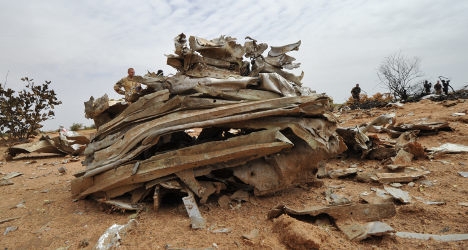 Debris found in the aftermath of the crash of the Air Algerie Flight AH5017. Photo: AFP

Flight AH5017, a McDonnell Douglas 83 jet that had taken off on July 24 from Ouagadougou in Burkina Faso bound for Algiers, crashed in the Mali desert after its pilots asked to turn back as bad weather struck.

"At the moment… nothing is telling us that we can rule out or confirm terrorism. We are not favouring any line of inquiry," Bernard Boudaille, of France's Bureau of Investigations and Analyses (BEA) air safety agency, told reporters in the Malian capital Bamako.

France bore the brunt of the tragedy, with nearly half of the victims its citizens. Other passengers came from Burkina Faso, Lebanon, Algeria, Spain, Canada, Germany and Luxembourg.

Presenting the initial report into a probe into the tragedy, Boudaille and the head of Mali's civil aviation accident commission, N'Faly Cisse, said the crew was experienced and not hampered by fatigue, and prepared to deal with difficult weather.

Boudaille said the plane's auto-pilot had been disconnected shortly before the crash, but it was unclear if this had been deliberate or the result of an accident as the cockpit voice recording has so far proved unusable.

The black box flight recorder, which was working, shows that the aircraft suffered a "sudden drop" after a "slowdown of its engines" at cruising altitude, he told the news conference.

Boudaille said the weather conditions at the time of the crash "can be considered normal".

The aircraft took "avoidance manoeuvres" to fly around clouds "that could cause severe turbulence and icing", he said.

But he added that the flight recorder showed no signs of turbulence and "there is nothing yet that can prove or disprove the hypothesis of icing" that would have caused the accident.

Remi Jouty, the head of the BEA, told reporters in August that it seemed likely that the plane had broken up on impact instead of in the air.

He said the jet had fallen out of the sky vertically at an extremely high speed and was apparently intact when it hit the ground.

"When we look at the trajectory, this leads us to believe that the plane did not break up into several pieces while in flight. This does not exclude that damage was caused during the flight," he said.

"I don't think we can at this point exclude the possibility of a deliberate act but we cannot say more for the moment," he said.

The flight recorder showed it took only around a second for the plane to fall from its last recorded altitude of around 500 metres, or 1,600 feet, to the ground of the Malian desert, investigators found.

Authorities initially thought 118 passengers and crew had died in the disaster but it later emerged that two people did not board the plane.

International investigators toiled at the site in highly inhospitable conditions and extreme heat for a week after the crash, taking around 1,000 samples of DNA from the site.

Forensic experts had to resort to using the DNA samples to identify the dead, because the power of the impact shattered the bodies of those on board and scattered debris from the plane over a wide area.

The accident was the third crash worldwide in the space of just eight days, capping a disastrous week for the aviation industry.

And a Taiwanese aircraft crashed in torrential rain in Taiwan on July 23, killing 48.