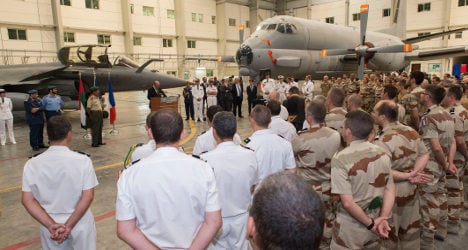 France got praise from US President Barack Obama for its decision to bomb Isis militants. Photo: Jean-Luc Brunet/AFP

France carried out its first air strike against the Islamic State group in Iraq on Friday, boosting US-led efforts to unite the world against the growing threat posed by the jihadists.

More than a decade after Paris famously refused to back the invasion of Iraq, France became the first nation to join the US aerial campaign in the war-torn country.

"This morning at 9.40, our Rafale planes carried out a first strike against a logistics depot of the terrorist organisation Daesh (Isis)," President Francois Hollande said.

The statement from his office said the target was in north-eastern Iraq but did specify exactly where, only adding: "The objective was hit and completely destroyed."

France, as well as Britain, had already sent aircraft into Iraq's skies for surveillance missions but Friday's strike was its first offensive operation against the jihadists.

US aircraft have carried out more than 170 strikes since August 8th but President Barack Obama has been keen to build a broad international coalition.

The bombing campaign was launched to protect Iraqi Kurdistan from advancing jihadists and attempt to help the autonomous region's troops retake the ground they lost.

Jihadists who had already controlled large swathes of land in neighbouring Syria took the city of Mosul, Iraq's second largest, on June 10th and swept through much of the Sunni heartland virtually unopposed.

In a second push in August, they dealt Iraq's Kurdish peshmerga forces a string of military defeats and attacked various minority groups, demolished heritage sites and displaced hundreds of thousands of people.

Footage of the beheading of two US journalists and a British aid worker in Syria sparked international outrage and spurred calls for tougher action against what is widely regarded as the most violent and powerful organisation in modern jihad.

Despite broad domestic support for a tougher stance, Obama has vowed not to send "boots on the ground", fearful of dragging his forces back into the Iraqi quagmire only three years after pulling them out.

The US leader has instead pledged to support Kurdish and Iraqi federal forces by offering air support and arms, as well as targeting intelligence and training.

On Thursday Congress backed his plan to arm rebels to take on Isis in conjunction with air strikes Obama has pledged to carry out inside Syria.

"These terrorists thought they could frighten us, or intimidate us, or cause us to shrink from the world," he said, after a rare moment of bipartisanship in the House.

"But today they're learning the same hard lesson of petty tyrants and terrorists who have gone before."

Hitting back in the propaganda war, the jihadists posted their latest video of a Western hostage, British journalist John Cantlie, in an orange jumpsuit.

In the footage, Cantlie promises to reveal in a series of programmes the "truth" about the jihadist group and appears to be under no immediate threat of being executed.

Some analysts argued the tone of the video revealed Isis was afraid of Western air strikes and was trying to convey a less barbaric image of an organization not incapable of reasonable behaviour.

As Kurdish and federal forces, backed by expanding air strikes, continued to make slow progress on Iraq's various frontlines, Baghdad was rocked by a series of bomb attacks.

In a Shiite-dominated district, militants blew up two car bombs and lobbed mortar rounds late on Thursday in what some said was an attempt to target an army intelligence base where senior Isis members are held.

In the city of Kirkuk, further north, another bombing killed eight people and wounded 13.

In Syria, Isis fighters were closing in on the country's third-largest Kurdish town of Ain al-Arab, or Kobane, on the Turkish border, cutting off its Kurdish militia defenders, a monitoring group said.

"IS fighters have seized at least 21 villages around Kobane," Syrian Observatory for Human Rights head Rami Abdel Rahman said. "The IS is using heavy weaponry, its artillery and tanks."

The town is one of three Kurdish majority districts where Kurdish nationalists have proclaimed self-rule and its capture would give the jihadists control of a long stretch of the Turkish border.

Syria's exiled opposition National Coalition warned of "the danger of a massacre" in the area, where Kurdish militia have doggedly resisted the jihadists.

Washington estimates that Isis has 20,000 to 31,500 fighters and there are concerns that returning jihadists could carry out attacks in Western countries.

According to the latest official statistics, the largest contingent of Western jihadists comes from France.