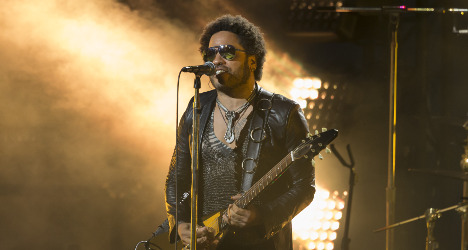 At 50, Lenny Kravitz is an American in Paris. Now, after turns designing shoes and acting in "The Hunger Games", he's returned to music with a new album he says just poured out of him during shooting of the box office smash.

Best known for the 1991 single "It Ain't Over 'til It's Over", Kravitz says inspiration struck on set as he played Cinna, the stylist to Jennifer Lawrence's heroine.

"I wasn't even planning on making an album. I was just working on the film. In the night, just all this music…," he told AFP in an interview in Paris.

Kravitz, who played Cinna in two of the trilogy's films, describes the album, entitled "Strut", as "grit and glamour, all together" plus "a lot of sensuality".

He appears on the cover in a black and white photograph, displaying a large tattoo on his bare chest and dressed in a dinner jacket and dark glasses.

He says the music itself is about love and relationships.

"All the different dynamics that you would have from lust to sex to heartbreak to desperation to devotion to misunderstood love," he said.

Kravitz has been living in Paris on and off for nine years and his last video was set in the city.

"I think it's a pretty sexy city, aesthetically it's gorgeous… the architecture, the design… it's very inspiring…" he said.

After nearly a decade, Kravitz is very much at home in France; in 2011 was awarded France's highest cultural honour — the Order of Arts and Letters.

"I don't feel foreign anymore. Now when I come, I just feel like I'm going home, because I am!"

But he says he still cherishes the "feeling I get being not from here".

Writing his tenth album, which is due to be released on Tuesday, the songs came very naturally.

"Every time I make an album, it's always different. This album just happened like this!" he said. "I won't call it easy but the flow was very good. Everything just came into my head. I didn't even have to think about it…. I just let it come out."

The last song on the album is a cover, something Kravitz says he rarely does.

But an unexpected blast of the 1965 hit single by The Miracles, "Ooo Baby Baby", left him marvelling.

"One morning early I was having my make up done for 'Hunger Games' and the make-up artist was listening to a Motown station and it came on.

"I hadn't heard it for a long time (and) it sounded so beautiful," he said.

Although Kravitz has sold over 40 million albums he says he's still hungry to make music.

"I don't know if I have anything to prove, I just want to express myself. I wanna grow as a musician, to be a better performer.

"It's not about the charts or the money, it's about the experience," he said.

And on reaching his half-century, he is philosophical.

"The number doesn't really mean anything. I feel great. I've never felt better than I do now… physically, mentally and spiritually," he said.