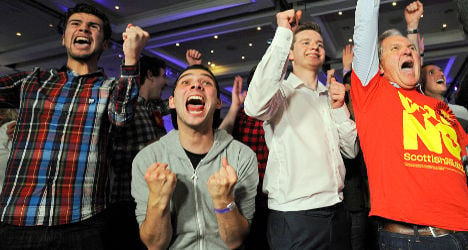 “A (vote) result to the contrary would have sent a negative signal," she said. "We’re at a time when we have to find ways to affirm our commitment to European unity."

Her comments were echoed by Philip Cordery, a top member of France’s ruling Socialist Party, who said the vote results were “a relief”.

Scotland voted by 55 to 45 percent to maintain the 300 year-old union with England, a margin of victory for the No campaign that belied opinion polls that had indicated a much tighter race.

The vote's massive turnout–nearly 90 percent–was also inspiring to French politicians who have seen two elections of abysmal mobilization as the French people have become increasing jaded by a political system seen in ineffective and out of touch.

But it was the fallout, or lack thereof, that came after the results were announced that really seemed to serve as a good example in the eyes of French leaders. Centrist UDI politician Jean Dionis tweeted: "I'm struck by the behavoir of the Yes partisans in Scotland: "We lost, but democracy won and Scotland too." Classy!"

French leaders had their eyes intently upon the outcome in Scotland in part because of the elements in France who's also like to be autonomous from the French state.

Pro-independence activists in the French regions of Brittany, Corsica and the French Basque Country were particularly interested in the Scottish vote, pointing to the fact they have their own languages and cultural identities.

Pro-independence activists point to the fact they have their own languages and cultural identities. France, however, remains a deeply centralized country and any talk of a negotiated breakaway seems little more than a pipe dream.

Despite the awareness that they almost certainly are not next in line – Catalans are likely to claim that honour – separatists in France are following closely developments on the other side of the English Channel, where London is embroiled in a last-gasp battle to keep the United Kingdom together.

“It’s a constitutional abnormality that France is the only country in Western Europe not to recognize any national identities other than a French identity,” Basque nationalist Peio Etcheverry-Ainchart told newspaper Le Parisien.

He applauded the move to hold a referendum in Scotland, which he said reflected the will of the people.

“We are in favour of a Europe based on a federation of sovereign peoples,” said Etcheverry-Ainchart, who serves as a politician with the left-wing Basque nationalist Abertzaleen Batasuna party.. 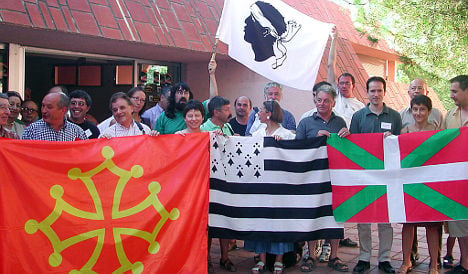