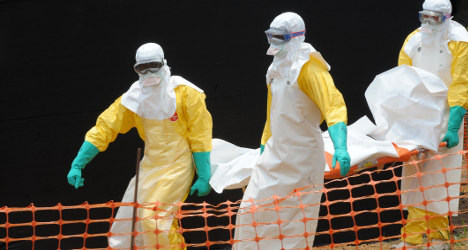 A French nurse is to receive 'experimental' treatments against the disease. Photo: AFP

France's health minister on Friday authorised "experimental treatments" for a French nurse who has contracted Ebola and is now being treated in a Paris hospital.

"She is receiving experimental treatments," Marisol Touraine said, adding that these drugs were administered "as soon as she arrived."

She was then taken immediately to the Begin military hospital on the outskirts of the capital.

"She was immediately transferred to the hospital in conditions of absolute security and immediately taken into care," Touraine said.

The nurse is "currently in a confinement chamber and has dedicated staff looking after her."

The minister "exceptionally" authorised the importation and use of several  experimental drugs to combat the Ebola virus, which has so far killed more than 2,600 people in West Africa.

The drugs authorised in France were Favipiravir from Japan, ZMapp from the United States and TKM-100-802 from Canada, according to France's Official Journal.

The nurse, who has not been identified, is the first French national to be infected with the virus, which causes severe muscle pain, vomiting, diarrhoea and — in some cases — unstoppable internal and external bleeding.