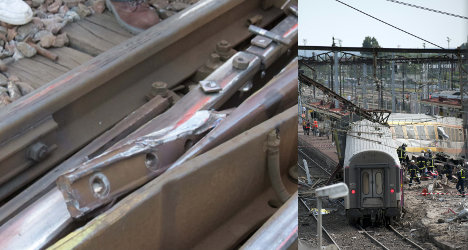 The July 2013 crash at the station of Bretigny-sur-Orge, south of Paris, was caused by a faulty fishplate — a joint bar that links two pieces of rail together, according to an expert report into the disaster published in July this year.

SNCF lawyer Emmanuel Marsigny said the charges were "expected, announced in advance and standard in this type of disaster."

"This is an important step that will allow the SNCF to have access to the file," added Marsigny. The company "has always said it will live up to its responsibilities and it is important to be able to take part in the enquiry," the lawyer stressed.

In addition to the faulty fishplate, the experts examining the disaster said there were around 100 identifiable defects in the area around Bretigny-sur-Orge, around 25 kilometres (15 miles) south of the capital.

These included numerous joints that were either missing or too loose.

Several of the faults had been known for up to eight months prior to the accident without having been rectified. One crack in a metal piece had first been registered in 2008.

The company which manages the track, RFF, was also charged with manslaughter on Tuesday.

Stephane Gicquel, head of an association representing victims, said it will be "interesting to hear answers from SNCF and RFF."

The two companies have the right to request a separate survey if they do not agree with the conclusions of the expert report.

The train came off the tracks and crashed into the station platform at 5:14pm on Friday July 13th, as it travelled at 137 kilometres per hour on its way from Paris to the west-central city of Limoges.

Four carriages of the train jumped the tracks, of which three overturned. One carriage smashed across a platform and came to rest on a parallel track; another lay half-way across the platform.

There were 385 passengers on the train.