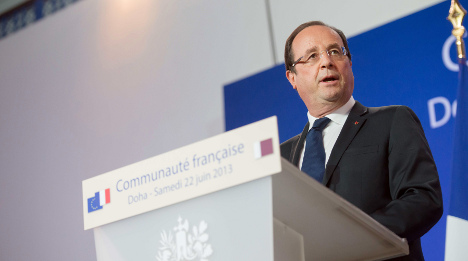 President Francois Hollande kicked off a rare news conference Thursday with the dramatic announcement that France would conduct air strikes in Iraq, as he sought to wrest back the initiative after a catastrophic few weeks at home.

A party rebellion, an emergency cabinet reshuffle, record high unemployment, zero-growth and record low popularity: Hollande has endured punch after punch in recent weeks and his live public outing had been hotly anticipated.

But he chose to start the two-hour press briefing with an announcement that France would join the United States in providing what he called "aerial support" for the Iraqi army in fighting militants from the Islamic State group who have taken over nearly half of the violence-ridden country.

"I decided to respond to the request of the Iraqi authorities to offer aerial support," Hollande told reporters.

"As soon as we have identified targets, we will act… within a short time-frame."

France has already conducted reconnaissance flights over Iraq that started Monday and dispatched weapons to the Kurdish forces fighting the IS group.

Hollande himself visited Iraq late last week — the most high-profile leader to do so since jihadists stormed across the country — and Paris hosted an international conference on the crisis Monday.

'No ground troops', only Iraq

But unlike the United States, Hollande was clear that France would not intervene in Syria, where IS militants also control swathes of territory.

He said: "We will not go further than that. There will be no ground troops and we will only intervene in Iraq."

The lightning offensive of the well-organised and well-funded Islamic State group has shocked the world, particularly as nationals from several European countries have travelled to Iraq and Syria to fight alongside jihadists.

Authorities in these countries — which include France, Britain and Germany — fear that those same nationals may return and launch attacks on home turf.

France's Interior Minister Bernard Cazeneuve said Sunday that around 930 French citizens or residents, including at least 60 women, were either actively engaged in jihad in Iraq and Syria or were planning to go.

In response, France's lower house National Assembly on Thursday approved an "anti-terrorism" bill which will usher in a travel ban on anyone suspected of planning to wage jihad abroad.

Pledges to get results

Hollande also announced France would set up a military hospital in Guinea to fight Ebola, but foreign policy aside, the Socialist leader faced a tough grilling on his record more than two years after he was elected, as the country struggles to emerge from the economic doldrums.

The country has failed to register any growth in the past two quarters and unemployment is stuck stubbornly above 10 percent, despite a pledge to reverse the trend of ever-lengthening jobless lines.

Paris is also battling to reduce its ballooning public deficit, expected to be 4.4 percent of gross domestic product (GDP) this year — way above the European Union limit of three percent.

Hollande said he would "negotiate" with Brussels over the stubbornly high deficit, as many believe Moody's will soon downgrade France's credit rating, perhaps as soon as Friday.

"Results are slow to come, I know, I can see it. They will come if we all mobilise," he said.

"I am aware that this (policy) line I set… will allow us to get results, before 2017 I hope," he added, referring to the year when the next presidential elections will be held.

He also asked that people wait until the end of his five-year term in 2017 to judge his actions.

The French government's response to the economic crisis is a so-called Responsibility Pact, a package of 40 billion euros ($52 billion) in tax breaks for companies in return for a pledge to create jobs, financed with €50 billion in public spending cuts.

But this is deeply unpopular with the left-wing of Hollande's Socialist party, some of whom have openly questioned the direction the country is taking.

On the personal side, the French president also faced a question about his ex-partner Valerie Trierweiler's recent kiss-and-tell that painted him as a power-crazed leader who secretly despises the poor, but refused all comment on the subject.

18:24: A journalists asks whether he, like his prime minister, considers the National Front at the "gates of power"

18:22: But Hollande again dodges the question, saying his full focus is on the presidential term he has right now

18:21: Journalists insist on the question whether he envisions going for another presidential termin the 2017 elections

18:16: No one has yet asked about the president's private life and Trierweiler's damning account of her relationship with Hollande

18:13: Asked whether he plans to be a candidate in the 2017 elections, Hollande says "I'm a president, not a candidate. It's not the time to pose that question… My only objective right now is to do everything for my country"

18:08: But he says there's nothing that says that those who have governed before don't have the right to to do so again

18:07: An AFP journalists asks about how he feels about the potential return of Nicolas Sarkozy on the political scene, but Hollande says he doesn't want to comment on "potential presidential candidate declarations", and especially not when they come from the opposition.

17:57: "When I take decisions I don't look to opinion polls, I look to what is the best for France"

17:54: The first question is about his record-low popularity. Hollande answers he's "not indifferent to them"

17:34: Hollande says the Responsibility Pact is a must and that by "supporting companies, you support those who work"

17:33: Scottish referendum is "decisive" for Europe, he says

17:32: The president talks about the eurozone, and says Europe "needs France"

17:30: Hollande says that when it comes to such a Mistral delivery "we're not there yet"

17:28: Hollande speaks about the Ukraine crisis and says Mistral warships "can still be delivered" to Russia, if Ukraine ceasefire lasts

17:27: France will build a military hospital in Ebola-hit Guinea, he says

17:26: "France has to take its responsibility when it comes to the countries" hit by Ebola.

17:20: Next up, Hollande addresses the threat of Ebola

17:19: France is ready to launch airstrikes on Islamist militants in Iraq, he says, but insists there will be no French ground troops

17:19: Hollande says the world needs to act, and says that France has "taken responsibity" by approving the delivery or arms to Iraq

17.08: Hollande calls the IS group by the acronym "Daesh", to avoid using the word "state"

17:07: The president talks about the dangers of terrorism, and especially the threat posed by Islamist militants such as the Islamic State group.

17:00: President François Hollande has begun his press conference at the Elysée Palace where some 400 journalists are present.