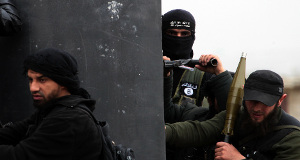 France's parliament on Tuesday approved a new anti-terror bill aimed at preventing potential jihadists from travelling to Iraq, Syria or elsewhere by confiscating their passports.

The travel ban on French nationals could be imposed "where there are serious reasons to believe that someone is planning to travel abroad to take part in terrorist activities, war crimes or crimes against humanity or in a theatre of operations of terrorist groups and in conditions likely to jeopardise public security upon their return to French territory", according to the text.

Under the scheme the travel ban may be imposed for six months, renewable for up to two years.

Someone placed under the order would have their passport and French identity card confiscated.

"Six months is a reasonable period because this is a serious measure," said Sebastien Pietrasanta, a deputy with the ruling Socialists, who introduced the bill.

He was responding to an amendment put forward by the conservative opposition UMP party for an initial one-year travel ban.

Anyone targeted by the new laws would have the right to legal redress, though the administration would not be able to reveal any classified information in relation to the case, Interior Minister Bernard Cazeneuve told
parliament.

The French move echoes plans under way in neighbouring Britain where Prime Minister David Cameron wants to give border police powers to seize passports from suspected would-be jihadists at the border.

His government is also drawing up measures to ban British nationals suspected of being jihadists from returning — but how this could be enforced is contentious.

Violation of the new French rules would be punishable by three years in prison and a hefty fine, measures that may also deter those who do manage to sneak out from returning to France.

According to Cazeneuve, around 930 French citizens have been travelling to and from Iraq and Syria recently, a 74 percent increase in eight months. Of those 36 were killed while overseas.

Pietrasanta said the new measures would also "save people from themselves", particularly young men and women who have just begun to be radicalised and who risk getting caught up in armed struggles.

The minister said that in recent months some 70 departures from France, deemed suspect, could have been prevented had this legislation been in place.

The draft law, which also targets messages posted on the Internet, is being rushed through the French parliament and is set to go to a single-round formal vote on Wednesday.