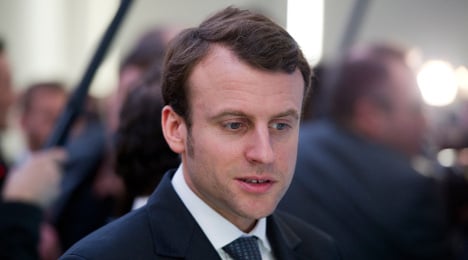 Crisis-hit France is "sick", the country's new economy minister said on Wednesday, urging immediate reforms to tackle sky-high unemployment and an economy that has failed to grow in six months.

"France is sick. It's not well. We have to describe the situation as it is," Emmanuel Macron told French radio.

"There has been a fever for several years in this country which is called mass unemployment … there is no choice but to reform the economy," stressed Macron, a 36-year-old former Rothschild banker, who was a surprise choice for
economy minister.

France, the eurozone's second-largest economy, is suffering from a record high unemployment rate — over 10 percent — and has registered no economic growth in the past two quarters.

Paris is also battling to reduce its ballooning public deficit, which is expected to be 4.4 percent of gross domestic product (GDP) this year, dropping only marginally to 4.3 percent in 2015.

It has gone back on a promise to the European Union to get the deficit below the maximum of three percent of GDP by next year, pushing it back to 2017 and setting France on a collision course with Brussels and austerity-minded Germany.

Added to its economic woes, the country is weighed down by a political crisis that has seen President Francois Hollande plumb record lows in opinion polls and a shock cabinet reshuffle in August to purge dissenters.

The government's unpopularity "is due to a lack of results", said Macron.

"We didn't go far enough in our first two years, we didn't reform and we are paying, if I may say, for a lost decade," added the minister.

In a rare victory for the government, Prime Minister Manuel Valls scraped through a parliamentary confidence vote on Tuesday by 269 votes to 244.

However, around 30 MPs from the ruling Socialist Party abstained in the vote, a rebellious left-wing rump that could cause problems for the government in future parliamentary votes.

In a 46-minute speech in the lower house of parliament, Valls also called for an end to talking down France.

"I've had enough of this permanent criticism of France and its ability to exert influence in the world," he told deputies.

The French government's response to the economic crisis is the so-called Responsibility Pact, a package of 40 billion euros ($52 billion) in tax breaks for business, financed with 50 billion euros in public spending cuts.

But the plan has been the target of left-wing ire for being too business-friendly and too austere at a time of economic crisis.

But Valls on Tuesday pledged he would not be swayed from this path despite sniping within his own party.

"There will be no U-turn, no change in direction, no zig-zagging," he vowed.

The fresh-faced Macron has already come under fire from the left-wing elements of the Socialist Party, especially given his banker background.

He did not win any friends on the left when he called into question France's 35-hour week, a cherished policy of the Socialists, in an interview he had given before taking office but published on his first day as minister.