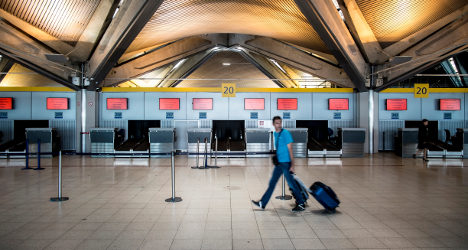 Air France scrapped more than half its flights Wednesday as pilots extended a strike into a third day, defying Prime Minister Manuel Valls who urged them to stop their "incomprehensible" industrial action.

Pilots have walked off the job in protest at the airline's plans to expand its low-cost leisure subsidiary Transavia France, whose pilots are cheaper to employ.

Unions fear the company will seek to cut costs by running more low-cost Transavia flights at the expense of Air France operations.

An Air France source told AFP that the hourly cost of employing a Transavia France pilot was some 40 percent less than a pilot at the senior group.

Air France was running only four out of 10 flights on Wednesday, as frantic negotiations between unions and management failed to provide the hoped-for breakthrough. Valls told French radio: "We have to stop this strike.

"It is regrettable that a single category of employee, in this case pilots, can bring air transport in the country to a standstill."

He said the strike was "incomprehensible" to most French people and was "weighing heavily on Air France, on its finances but also on the attractiveness and the image of our country."

Air France boss Frederic Gagey has put the daily losses from the strike at €10 to 15 million.

Economy Minister Emmanuel Macron also weighed in, saying: "We can no longer accept that the country is blocked by a few people… I think the strike has to stop."

Management has attempted to make some concessions to pilots' fears, limiting the Transavia fleet to 30 planes instead of the 37 originally planned until 2019.

Unions want to ensure Air France pilots are at the controls of any plane with more than 100 seats, regardless of the operating company — Transavia included.

As in previous days, airports were largely deserted as Air France notified passengers in advance that their flights were cancelled.

One disgruntled passenger at the airport in the southern city of Nice, who gave his name as Jean-Pierre, found his domestic flight to western France cancelled.

"It's a bit of a swindle when you see how much the pilots earn," he complained.