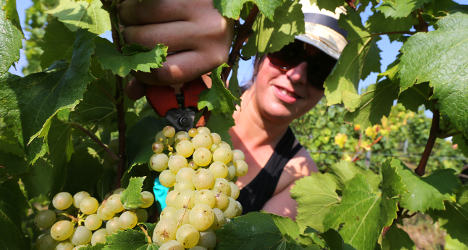 After a gloomy summer, sunny skies are smiling on Bordeaux, France's premier wine-growing region, since the start of September, sparking sudden talk of high-end vintages.

"We are making up an awful lot of ground," says Antoine Medeville, a winemaking consultant for several vineyards in the Medoc region. "This September sunshine is a godsend."

The harvest is well under way for white varieties in Bordeaux, while picking will begin for the reds in the last week of September.

"We are hoping for a miracle," said Denis Dubourdieu, the owner of several chateaux in the region and director of France's authoritative Institute of Vine and Wine Sciences.

"It wasn't hot enough this summer, but we made up for the August heat deficit with an exceptional September," he told AFP.

Thanks to the unexpected Indian summer, the outlook is rosy for white varieties, including sweet wines, that make up some 12 percent of the 112,600 hectares (272,000 acres) given over to vineyards in Bordeaux.

"There is a very good balance between sugar and acidity," Dubourdieu said, likening it to that of a Sancerre or a Bourguignon.

"It's a rare and interesting vintage thanks to this cool summer rescued by the good weather of September with cool nights," he said, adding that the shift boosted the grapes' state of health.

"We are harvesting white wine grapes that are acid, sweet, fruity and healthy, the four perfect ingredients," he said.

As for the reds, "we're crossing our fingers while leaving them outside as long as possible" in the hope that the heat of the Indian summer will burn off their acidity.

Unlike for white wine, a good red requires low acidity, and Dubourdieu said the grapes for the reds "deserve to ripen more" in order to become fruitier.

Winegrowers are anxiously scrutinising the weather forecasts, with weekend storms predicted in the southwest that may hasten the start of the harvest for the merlot variety, the most precocious of the three traditional Bordeaux
along with cabernet sauvignon and cabernet franc.

The unexpected turnaround is welcome news in Bordeaux, which saw harvests nearly wiped out by severe hailstorms in 2013.

Output was low across the country in the last two years, but France's agricultural authority last month forecast a recovery to about average — A saround 45.4 million hectolitres, or six billion bottles.