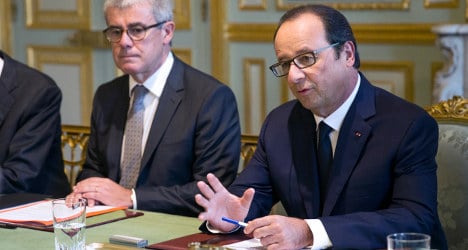 World leaders were in Paris to discuss how to stop ISIS militants. Photo: Etienne Laurent/AFP

The leaders of France and Iraq Monday urged swift action against Islamic State militants at an international conference to shore up an anti-jihadist coalition, but Iran immediately slapped down any possibility of taking part.

"There's no time to lose," said French President Francois Hollande as he opened the Paris conference that brings together representatives from around 30 countries and international organisations.

"The fight of the Iraqis against terrorism is our fight as well," Hollande stressed, urging "clear, loyal and strong" global support for Baghdad.

Iraqi President Fuad Masum also stressed the urgency of the crisis, as the beheading of a third Western hostage in the run-up to the conference stepped up the pressure on the international community to take the fight to the Islamic State (IS) extremist group.

"They need to act quickly because if there is a delay, if this campaign and this support for Iraq is delayed, maybe Daesh will occupy other territories and their threat will be even bigger," said Masum, using an alternative name for IS.

"We are still asking for regular aerial operations against terrorist sites. We have to pursue them wherever they are. We need to dry up their sources of finance," added the Iraqi leader.

The international community is scrambling to contain the IS jihadists — who hold a quarter of land in Syria and 40 percent of Iraq and could number as many as 31,500 fighters, according to the CIA.

As if to underscore the urgency of the campaign, France announced just hours ahead of the conference it was joining Britain in carrying out reconnaissance flights in support of the US air campaign against the jihadists.

"This very morning, the first reconnaissance flights will be carried out in agreement with the Iraqi and Emirati authorities," Defence Minister Jean-Yves Le Drian told French troops, including pilots, at the Al-Dhafra base in the United Arab Emirates.

Shortly afterwards, two French Rafale fighter jets took off from the base, an AFP correspondent reported.

During the conference, US Secretary of State John Kerry will seek to fine-tune the strategy of the US-led coalition, following a marathon tour through the Middle East to drum up support.

He told CBS's Face the Nation on Sunday "all bases were covered" in the coalition with some allies offering air strikes and others boots on the ground. He stressed however that "we are not looking for that at this moment anyway."

"Every single aspect of the president's strategy, and what is needed to be done in order to accomplish our goal, has been offered by one country or multiple countries, and all bases are covered," Kerry said.

US President Barack Obama has set out a strategy to defeat IS that would include air strikes in Syria and expanded operations in Iraq, where US aircraft have carried out more than 160 strikes since early August.

The US leader also foresees training "moderate" Syrian rebels to take on IS and to reconstitute the Iraqi army, parts of which fled an IS blitzkrieg across northern and western Iraq.

Hollande said that the international community "needs to find a durable solution in the place where the (IS) movement was born. In Syria."

"The chaos is benefiting the terrorists. We therefore need to support those who can negotiate and make the required compromises to secure the future of Syria," said Hollande.

"They are the forces of the democratic opposition. They need to be backed by all means," added the president.

Ten Arab states, including Saudi Arabia, are among the countries backing the coalition.

Speaking in Paris, a US official said the number of countries signing on was "going up almost every hour," from Europe and the Middle East right across to Japan, South Korea and New Zealand.

However, Iran, which was not invited to the conference, said it had rejected US overtures to help in the fight against the militants.

"Right from the start, the United States asked through its ambassador in Iraq whether we could cooperate," supreme leader Ayatollah Ali Khamenei said in a statement on his official website.

"I said no, because they have dirty hands," said Khamenei, who has the final say on all matters of state in Iran.

He accused Washington of seeking a "pretext to do in Iraq and Syria what it already does in Pakistan — bomb anywhere without authorisation."

The gruesome beheading of British aid worker David Haines has increased the urgency of the Paris talks.

Haines was the third Western hostage to be beheaded by the militants in less than a month. IS released a video Saturday showing his killing and issued a death threat against another British captive, Alan Henning.