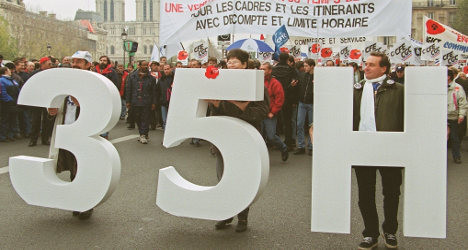 France's bosses union has sparked outrage with a plan to fix the country's economy. Photo: AFP
Union leaders have reacted furiously to proposals by France's employers' federation, Medef, to scrap two bank holidays a year and chip away at the minimum wage and the 35-hour working week.
The proposals, which also included allowing shops to open on Sundays, are from a list of 50 ideas which the federation claims would free up France's notoriously rigid labour market and create a million jobs in a country where a record 3.4 million people are looking for work.
"We believe that we have not tried everything to fight unemployment, we have just tried things that haven’t worked anywhere and forgotten about things that have worked everywhere,” Medef said in a report on its proposals, quoted by the French business daily Les Echos.
To achieve those targets Medef proposed axing two of the 11 bank holidays per year, allowing exceptions from paying minimum wage to certain workers and tweaking 35-hour work week protections. The reduced labour rules would allow the bosses to negotiate when overtime pay is required and how much it would cost the company.
In Medef's view just allowing all businesses to be open on Sunday would create up to 200,000 jobs in tourism and up to 100,000 in commerce and distribution. As it stands only certain businesses are legally allowed to open on Sundays, such as stores in tourist areas and certain supermarkets.
Medef admitted that its proposals might "appear aggressive or caricatural to some." That was exactly how union leaders saw them.
"We reject all these proposals," said FO union leader, Jean-Claude Mailly. "What will they propose next, that we start making children work?"
CFDT leader Laurent Berger also slammed the proposals and accused the Medef of "provocation."
He told RTL radio that none of these ideas had been mentioned last week when unions met with the employers' delegates in ongoing government-sponsored talks aimed at creating more jobs.
The Medef proposals had been due to be made public on Wednesday but, in the wake of the outraged union reaction, it put off the report's release for a week. It also said the proposals cited by Les Echos were from a draft version and may not be included in the final document.
Economic growth in France ground to a halt in the first six months of the year and President François Hollande has been unable to live up to his promise to bring down unemployment.
His strategy for pulling France out of the mire is his much-vaunted Responsibility Pact, which will cut social charges for businesses by €40 billion ($53 billion) in exchange for them creating 500,000 jobs by 2017.
This will be financed by 50 billion euros in public spending cuts, but the plans sparked a rebellion on the left flank of Hollande's ruling Socialist Party.
Despite regular reports arguing that France's 35-hour week is a drag on the economy, the French are attached to the measure that allows many of them to have a day and half off a month on top of their already generous annual holiday allowance.
They also cherish their 11 bank holidays a year, several of which fall in the month of May and result in few French doing a full-week's work in that month.
By : Rory Mulholland