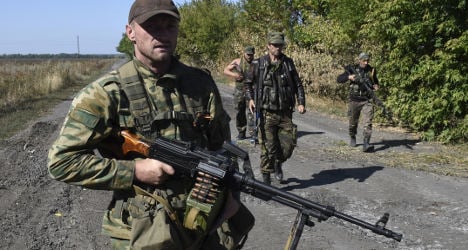 There were however no details of the discussions between France's Laurent Fabius, Germany's Frank-Walter Steinmeier and Sergei Lavrov of Russia after a giant international conference on fighting Islamic State militants in Iraq.

Steinmeier's spokesman and a French diplomatic source confirmed the talks.

Ukrainian government forces and pro-Russian rebels engaged in heavy fighting on Sunday in which six people were killed, despite a truce signed on September 5. The warring sides signed up to a 12-point ceasefire after talks in the Belarussian capital Minsk — the first truce backed by both Kiev and Moscow — but there have been almost daily reports of violations.

President Francois Hollande  said on earlier this month France could go ahead with delivery of a warship to Russia in November as long as a lasting ceasefire and political conditions in Ukraine were in place.

"It could be in November but the conditions have to be in place … What are the conditions? A ceasefire and a political agreement," Hollande told reporters on the sidelines of the NATO summit in Newport, Wales.

France has been under international pressure to cancel the €1.2 billion deal and received a positive reaction from various EU countries and the US when it announced on Wednesday, the delivery would be suspended over the crisis in Ukraine.

The truce in Ukraine is viewed as a preliminary step for a more sustained peace plan to end a conflict that has claimed more than 2,700 lives.