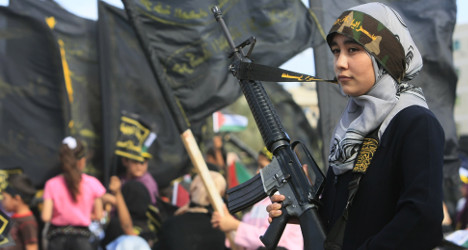 A Frenchman thought jihad was great way to get back at his estranged wife (not pictured here). Photo: Mohamed Abed/AFP

The American trend of falsely reporting a serious incident which then generates a massive police response, better known as swatting, may have found its French counterpart.

A Frenchman furious at his wife taking the kids and leaving him went to his local police station in south western France and told officers a dangerous tale that sounded ripped from the headlines and real enough to be true.

The man, who was not named, said his spouse had become radicalised by anti-Semitic, anti-US Islamists, had started wearing a burqa and had been planning to travel to Libya to engage in jihad, when she disappeared with their children.

After the man turned up at the police station in Bordeaux at 3 am on Saturday to report them missing, it prompted a police investigation that led officers straight to the house of the wife's friend, Le Parisien reported. Police didn't find a jihad candidate, however. Instead the officers discovered the wife, wearing a mini-skirt, who told them she had merely left the family home after a row and had no plans to engage in holy war.

The man could now be charged with making false accusations and faces a heavy fine if convicted.

The report came as France's parliament began debate on a bill providing new tools to fight terrorism, including confiscating the passports of would-be jihadis and blocking websites that encourage French citizens to embark on jihad.

Interior Minister Bernard Cazeneuve said this weekend that 930 French or French residents were either in Syria and Iraq, planning to go there or already on the way there.