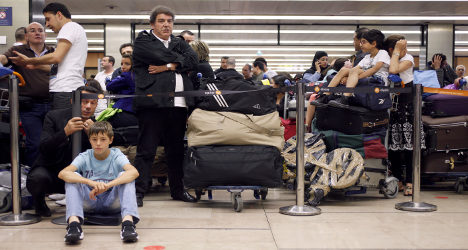 Stranded passengers voiced outrage on Monday as French flag carrier Air France scrapped half its flights due to a pilots' strike in protest of company plans to expand its low-cost subsidiary Transavia.

Air France warned that disruption would only get worse as the week went on, with 60 percent of its flights likely to be cancelled on Tuesday.

Fears were mounting that the planned week-long protest — which would be the longest at the company since 1998 — could spell travel mayhem across the country.

The strike sparked anger among passengers stranded by the stoppage, with Jean-Marc Ragot arriving in Paris from Nairobi only to find his connecting flight to the eastern French city of Lyon cancelled.

"I can't return home, thanks!" he complained at Charles De Gaulle airport.

"I've had it up to here with strikes in France. One always has a problem when one returns home," he said.

"Air France should make profits this year if the strike does not have an impact on its efforts," he said.

Air France said it had sent 65,000 text messages to alert passengers affected by the strike called by its main pilots' union SNPL, and deployed some 7,000 extra workers to help stranded customers.

Munich-bound Carlos Gomez received such a message but turned up at Paris's main airport anyway despite all flights to the German city being scrapped.

"I simply have to get to Munich today and I have to find a solution," he said.

At Paris's main Charles De Gaulle airport, 212 Air France flights were cancelled on Monday out of some 500.

But flights elsewhere were worse hit with 80 percent cancellations in the southern city of Toulouse, and 70 percent in Marseille, Lyon and Nice.

On Tuesday "40 percent of the flights will be maintained", Air France's director of operations Catherine Jude told reporters.

But a pilots' union warned that eight out of 10 flights could be cancelled as the strike continued later into the week.

The company urged "customers who have booked a flight between September 15 and 22 to delay their trip, change their ticket free of charge or claim a refund."

Unions fear that expanding Air France's low-cost operation Transavia will lead to "jobs being outsourced" and "social dumping" with pilots being employed on local contracts.

Air France boss Frederic Gagey put the daily losses from the strike at "€10 to 15 million" ($13-$19 million) and said management was "doing everything with the social partners to try and find a way out of this situation."

Passengers whose flights are cancelled will be fully reimbursed while the compensation for delayed flights will range between €250 to 600.

Unions warned the transport situation would be even worse on Tuesday and Wednesday as the pilots who did decide to work on Monday would have to take their legally stipulated rest.

The company said: "If the strike continues beyond September 15, the flight schedule will be modified as a result. The knock-on effects will be communicated to passengers the day before they are due to leave."

Seeking to take advantage of its rival's woes, low-cost airline easyJet on Saturday laid on 1,000 extra seats on flights from Paris to the southern cities of Toulouse and Nice.