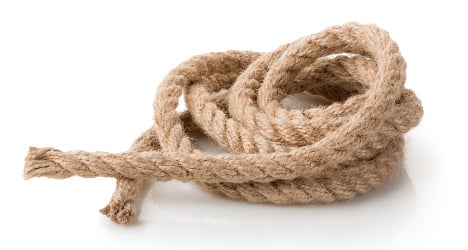 The rope a Frenchman used to kill himself was sent to his wife. Photo: Rope: Shutterstock

A grieving French widow received a package this summer that she reacted to at first with disbelief and then horror when she realized its connection to her husband's suicide.

It was in February when Jean-Michel Reboul, 49, had hanged himself at the textile factory in Berck sur Mer in northern France where he worked. He'd been depressed and suffering over personal and work-related issues.

And it was months after his death that his widow Lysiane Reboul contacted his former employer to get back whatever of her husband’s effects remained at the factory. The company promised to send them along.

On June 13 she opened the eight-kilo package from his factory and quickly made a macabre discovery. .

“Inside there was a T-shirt, socks, a pencil bag…and a rope. Can you imagin the shock?” she told French daily La Voix du Nord.

Deeply disturbed, she called the factory for an explanation. Management there confirmed it was indeed the rope her husband had used to end his life. They tried to explain the mistake.

“The police asked us to gather up your husband’s personal effects and the rope in case it was needed for the investigation,” the company wrote in a message to her. “In response to your request we sent over the package (containing his possessions) without verifying what was in it."

A manager added: “I once again apologize, as I did on the phone, for this very clumsy episode.”

However, the widow believes the rope was an effort to intimate her as she continues to battle with the company in an effort to get compensation for her and her family.

Suicide is a significant problem in France, an average of 21 men and eight women taking their own lives and around 700 attempting to everyday.

Every year around 220,000 people in France attempt to take their own life and 10,000 of those die as a result. These alarming statistics mean that the number of suicides in France is more than double that of the UK and Spain.

Jean-Claude Delgenes, the director of Technologia, a company which works with highlighting safety concerns for workers, said that  historically, from before the revolution up to the present day, France has never shown a good example of how to deal with the issue.

“For a lot of issues, whether its suicide, asbestos or cancer, France was left behind when it came to creating programmes and policies geared towards prevention," he told The Local previously. “In the UK the first plan to help prevent suicide was laid out in 1950, in France it was in the year 2000.