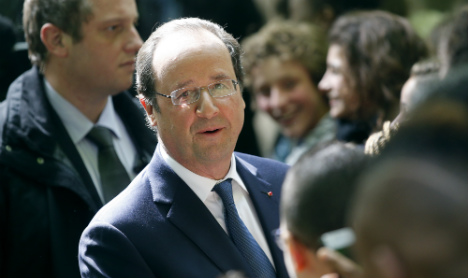 In what promises to be a crunch week for under-fire Hollande — whom two-thirds of French voters want to resign, according to a recent poll — he will also face a grilling from reporters at a rare news conference on Thursday.

Experts say the government is unlikely to lose the confidence vote, which would mean fresh elections, but it will almost certainly reveal splits in Hollande's ruling Socialist Party.

Prime Minister Manuel Valls, who will present the government's work programme to parliament and submit it to the confidence vote, has urged party unity, especially with, as he warned recently, the far-right National Front "at the gates of power".

The anti-immigration party of Marine Le Pen made huge strides at recent elections thanks to voter disillusion with mainstream politics and polls suggest she could even win the first round of a presidential vote in 2017.

Political scientist Philippe Braud told AFP he thought the vote would pass "because the fear of catastrophe is still the best source of unity".

While there is grumbling from rebels on the left flank of the Socialist Party, "I don't think they are kamikaze enough to risk their seats," said Eddy Fougier, a political expert from French think-tank IRIS. Despite Valls' calls for unity, a left-wing rump of the ruling Socialists — estimated at around 40 — has threatened to abstain in the vote in protest at what they see as a pro-business lurch to the right.

These deputies have voiced reservations about Hollande and Valls' Responsibility Pact, a package of tax breaks for companies over three years financed by 50 billion euros ($66 billion) in public spending cuts.

Valls is likely to insist that this is the only solution to France's economic woes, as the eurozone's second-biggest economy battles zero growth, record high unemployment and a ballooning budget deficit that has set it on a collision course with the European Union.

The prime minister has said he will give a speech of "confidence", even "optimism" about his country's situation, criticising a recent bout of "France bashing" as the country lurches from crisis to crisis.

"One cannot speak about France like that. France — I never stop saying it — is a great country … there is a 'France bashing' which is quite honestly unbearable," Valls said last week.

A close advisor to Valls told AFP that while getting a majority for the confidence vote will be "difficult", "we are working flat out on that".

His speech "will not be a speech of announcements. It will be about stressing the demands of the current situation and the need to stick to the choices that have been made," the aide said.

Braud said Valls would likely offer something to the rebels "in terms of form … but in terms of substance, he won't move an inch".

It would take 60 abstentions to put the government in peril, Fougier calculated, which gives Valls a reasonable margin despite a razor-thin parliamentary majority.

However, while the rebels are not likely to bring down the government now, they will cause problems in legislation further down the line, experts believe, with a budget debate looming next month. Hollande's second challenge of the week will be confronting the French and international press on Thursday in a rare news conference.

The president will face questions not only about France's political and economic woes, but also his personal difficulties following his former partner's portrait of him as a power-hungry and cold man who secretly despises the poor in her memoir.

And waiting in the wings is former president Nicolas Sarkozy, expected to announce his return to French politics some time this week.

Ironically, the return of the right-wing rival Hollande defeated in the 2012 election could actually bring the president some breathing space, his aides believe.

"Sarkozy will come. It will focus attention on other things," a Socialist Party official said.