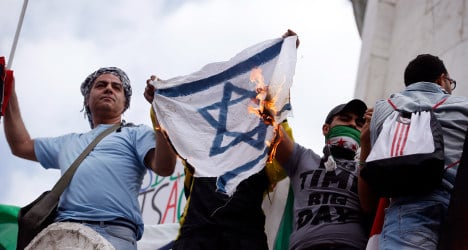 A total of 529 anti-Semitic actions or threats were registered up to the end of July, against 276 for the same period last year, the Council of Jewish Institutions in France (CRIF) said, citing figures gleaned from the interior ministry.

They included violence against individuals, arson and vandalism.

Such anti-Semitic acts “exacerbate the growing unease that oppresses Jews in France each day and overshadows their future”, CRIF said in a statement.

Yet more worrying, the group added, is the appearance of new forms of violence against Jews — including attacks by organised gangs and the targeting of synagogues, as well as acts of vandalism against Jewish businesses and “terrorist attacks”. Last week the French office of the Jewish Agency for Israel said that more Jews have left France for Israel so far this year than from any other country, blaming a “climate of anti-Semitism”.

France houses some 500,000-600,000 Jews, the third largest Jewish population in the world, after Israel and the United States.

In addition to the largest Jewish diaspora in Europe, France is also home to the continent's biggest Muslim community, which is estimated at around five million.

Concerns have been raised by violent attacks on Jews, including the murders of a rabbi and three Jewish children by an Al-Qaeda inspired gunman Mohammed Merah in 2012 in the southern city of Toulouse.

Support has also been rising for far-right parties like France's National Front, which has long faced accusations of anti-Semitism.

“Little Jerusalem” for its large community of Sephardic Jews.

SEE ALSO: 'Jews in France are stand-ins for Israeli targets'