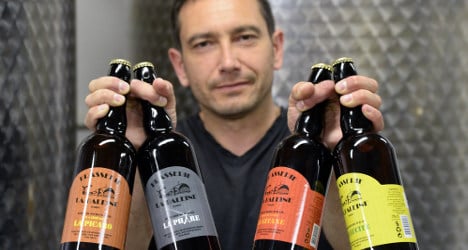 A citrus-flavoured blonde beer to go with foie gras or a peat-smoked brew perfect for whisky lovers: Three decades after microbreweries faced near extinction in wine-dominated France, craft beer is finally taking off.

With the number of small breweries nearly doubling since 2010, some craft beers are even making it onto the menus of some of Paris's best restaurants.

Former photographer and beer enthusiast Bruno Torres didn't hesitate to try his hand at brewing when he found himself looking for a new career in 2012.

The 42-year-old, whose La Baleine microbrewery opened last year in Paris, admits it might have seemed like a "mad" idea to some.

Two years on, however, he has his own range of beers and finds himself part of a small but rapidly expanding industry.

"I love the creativity, the freedom which exists with beer," Torres told AFP, explaining that he deliberately set out to make beer that could accompany food.

In addition to his peat-smoked and citrus-flavoured beers, he also produces two others — a dessert beer and a fruity one that goes well with meat or seafood.

"When we do tastings people are always drawing parallels with different foods, especially women who are really keen on these beers," he said.

"They suggest what would go well with the different beers. They do it automatically and it's really interesting," he added.

Robert Dutin, author of a guide to French craft beers, says microbreweries are now popping up all over France with 334 in existence in 2010, rising to around 600 in 2013.

Paris also boasts a growing number of hip microbrew bars such Le Supercoin, Express de Lyon and La Fine Mousse which has 20 beers on tap and 150 more available in bottles.

The French still drink far less beer than their European neighbours, with only two countries in the 28-member European Union consuming less of it.

But according to Dutin, the beer the French do drink is now softer, less bitter and more refined than before.

Scotsman Craig Allan brews three beers in Belgium but plans to move production to his French farmhouse in the northern Picardie region later this year.

"It seems as if everybody wants to start a brewery at the moment! It seems to be taking off in a big way," he said.

"Really excellent" craft beer is now available in France at less than €10 ($13) a bottle and increasingly catching the attention of sommeliers who see its potential, he added.

A handful of "good gastronomic" Parisian restaurants now stock Allan's beers, in particular his most popular, Agent Provocateur, which he describes as "dry, aromatic and really really fruity with passion fruit and mango notes".

"Because I think that's the key to wine with food," he said.

"It's the acidity that makes wine so refreshing whereas a lot of beers have traditionally been a bit too sweet for food."

Craft beers may still represent barely three percent of the market in France according to Dutin, but Pascal Chevremont, of the Association of French Brewers, said their success had prompted major beer companies to come up with their own speciality beers.

"Every year the big breweries are creating new beers," he said. "Before, one could say 'I don't like beer' but now there is a beer for everyone."

Microbrewers, however, acknowledged that there was still a long way to go before craft beer attracted the same level of interest in France as in the US, Germany, Belgium or Britain.

"I don't think it's at the point yet where you can convince the average French person to have a beer with their main meal," Allan said, adding that sometimes it almost felt as if he was trying to convert people "one at a time".

"But there are a lot of beers that make great aperitifs — and the French love an aperitif — so I think that will be one of the routes for getting people more interested," he said.