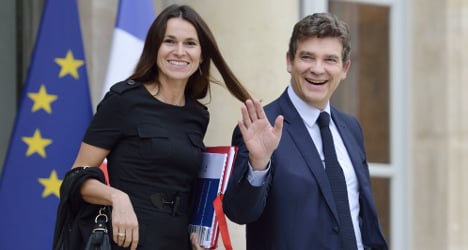 United by a dislike for the French government's rightward turn, and now possibly by love — the recently ousted ministers of economy and culture are reportedly an item, according to Thursday's edition of magazine Paris-Match.

The reshuffle was triggered by a speech from Montebourg in which he criticized the economic austerity measures under Socialist President Francois Hollande.

But, according to Paris-Match, the two ex-ministers nursed their wounds together with a holiday on the west coast of the United States.

"Love story in San Francisco" reads the front page of the weekly magazine alongside a photograph of the two ministers apparently posing for a selfie.

"After the reshuffle, the two former ministers chose California for a romantic getaway," it said on its website. AFP was not able to reach the politicians for comment on Wednesday. Previously a journalistic taboo in France, the private lives of public figures have become increasingly common fodder for the French media.

Only last week, Paris-Match published extracts from a salacious new book by Valerie Trierweiler, Hollande's former First Lady, in which she recounted her overdose on sleeping pills after discovering the president had been cheating on her with a much younger actress.

Last month's cabinet reshuffle saw the departure of three rebellious ministers from the left flank of the ruling Socialist party. Valls has pushed for a more centrist, pro-business direction for his government to address a stagnant economy and floundering public confidence.

Montebourg has said he reacted to his dismissal by telling the prime minister he had "regained his freedom".

An equally defiant Filipetti said she would not be applying for another ministerial post, preferring "loyalty to ideals" over "solidarity" with the government.