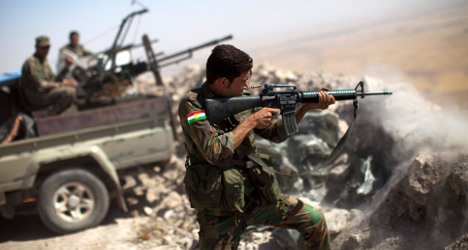 France has offered to help in a bombing campaign against Islamic militants in Iraq. Photo: JM Lopez/AFP

French Foreign Minister Laurent Fabius said on Wednesday that France was prepared to take part in air strikes on Islamic extremists in Iraq "if necessary."

"In Iraq… we support the formation of an inclusive government. We will participate if necessary in an aerial military action," Fabius said in a speech in Paris

He spoke just hours before US President Barack Obama told Americans he is ready to launch air strikes against the Islamic State in Syria, in a prime-time address steeling them for a long duel with the jihadists.

Obama called his plan "a comprehensive strategy to degrade and ultimately destroy" the ultra-violent extremists.

In the much-anticipated speech, given blanket coverage on television networks, Obama also announced plans to rebuild Iraq's splintered army, and to arm and train moderate rebels in Syria.

Last week, French President Francois Hollande had raised the possibility of a "political, humanitarian and if necessary military response in accordance with international law" to fight against Islamic State.

Fabius urged an international alliance to fight the dangers posed by Isis  "which could reach our own soil," he said, adding: "Several hundred French jihadists are present in Iraq and Syria."

However, Fabius stressed that the "modalities" of French action in Iraq and Syria were not the same.

"In Syria, the situation is different: (President) Bashar al-Assad cannot be a partner, because he has an established link" with Isis.

"That is why we will continue to help the moderate Syrian opposition, which is fighting both" the Islamic State and the Assad regime.

Last year, France was in the vanguard of states ready to strike the Syrian regime but backed down after the United States decided against military action.

Washington is now in the process of pulling together an international alliance against the militants, present in both Iraq and Syria.

According to French diplomatic sources, what is preventing France from a military intervention in Syria is the lack of an international legal basis.

In the case of Iraq, any military action would have to come at the request of Baghdad and would be backed up by the "self-defence" article in the United Nations charter, according to diplomatic sources.