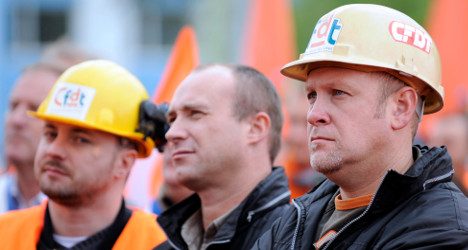 The crisis-hit French economy is facing its "hour of recovery or decline," the head of its central bank said on Thursday, warning the economy would stay stuck if the government did not implement immediate economic reform.

"France is not beyond repair but this is the hour of recovery or decline. We have to choose and, of course, we have to choose recovery," Christian Noyer told French radio.

France, the eurozone's second-largest economy, is suffering a major crisis, with zero growth in the first two quarters of the year, record unemployment and a ballooning deficit that Paris admitted on Wednesday will break EU rules until 2017.

"There is no alternative to reforms that raise the growth potential of the economy that have been announced. Indeed, there is no Plan B," the governor added.

On Wednesday, the government unveiled a raft of disappointing economic news, cutting its growth forecasts drastically for this year and next, and admitted it would break its promise to the EU to reduce its budget deficit to three percent of output by next year.

Paris sees economic growth at 0.4 percent this year, recovering slightly to one percent next year — a dramatic reduction from the one percent and 1.7 percent previously forecast.

The deeply unpopular government of President Francois Hollande is pinning its hopes on its grand economic strategy of the Responsibility Pact — a programme of tax breaks for businesses and spending cuts.

But Noyer urged a faster pace to the €50 billion ($66 billion) spending cuts planned over three years.

"We need to make major cuts in spending. We're going too softly," said the governor.