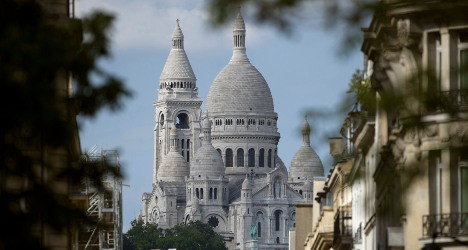 Paris's top cop got a nasty taste of the scammers hassling tourists in his city. Photo: Fred Dufour/AFP

Bernard Boucault, Paris’s Police Commissioner, was on an official visit to observe the scammers at tourist hotspot Montmartre on Saturday with the capital’s head of public safety, Jacques Meric, when the officials were attacked.

According to French magazine Le Point, the pair, along with Boucault’s chauffeur, got out of a car at around 4pm on Louise-Michel Square at the foot of the Montmartre hill and confonted a group of “tresseurs” (or braiders), who are street hustlers that snag tourists in the notorious "bracelet scam."

To carry out that rip off crooks tie a bit of string to a passing tourist's finger or wrist and then procede to weave it into a friendship bracelet. The tourist is expected to pay up at the end or face an angry scammer.

In this case, the attack on Boucault started after he tried to put a stop to some of the scammers working that day. They reportedly reacted with violence.

Boucault was slapped, his chauffeur punched while Meric was kicked.

There was no word on whether any of the assailants were caught or charged with a crime, but police are certainly looking for them.

The area, which probably sees a good share of Paris's 30 million visitors per year, is notorious for its street scammers, who often target tourists, both verbally and physically.

Apart from the bracelet scam “bonneteau” is also a common site in the area. It's a three-card Monte-type sleight of hand trick where the victim bets their cash that he or she can find the “money card”, a pea under a cup or a white-marked disc.

Even though it looks like easy money, the victim pretty much always loses. Paris unveiled new measures earlier this summer to protect its mobs of visitors from pickpockets and muggers.

The efforts build on a security plan drawn up last year in response to a wave of crime against tourists that at one point led staff at the Louvre to go on strike to protest the mini-armies of pickpockets, many from eastern Europe, operating inside the museum.

Chinese tourists, who are estimated to spend an average of €1,300 during their holidays in France, are seen by criminals as a lucrative target as they often carry large amounts of cash.

Robbers attacked a group of Chinese visitors in March last year in a restaurant in and relieved them of €7,500 in cash, plane tickets and passports. Around one million Chinese tourists come every year to Paris, the world’s most visited city, and their numbers are expected to grow.