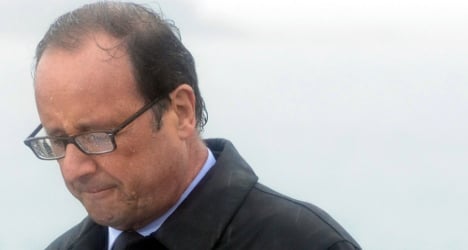 French President Francois Hollande on Wednesday launched a fresh salvo against a scathing memoir written by his former partner, saying he had been particularly "hurt" by claims he secretly
despises the poor.

In an interview with Le Nouvel Observateur, parts of which were published online a day before the weekly hits newsstands, the president defended his commitment to the needy as he struggles to stop his popularity ratings from
sinking to new depths.

"I don't want people to be able to say or write that I don't care about suffering in society, because that's a lie that hurts me," he said in the interview conducted on Monday.

Hollande's partner of nine years until January when he dumped her following revelations of his affair with an actress, Valerie Trierweiler made the claims in a book that came out last week and has already become a best-seller in France.

In the memoir that tracks her passionate affair with Hollande and their acrimonious break-up, Trierweiler also alleges that the Socialist leader secretly despises the poor and jokingly calls them the "toothless" in private.

Hollande had angrily rebuffed these accusations on Friday at a press conference that followed a NATO summit in Britain, and did so once again in the interview.

"Yes, I met people suffering the worst kinds of hardships, worn down by life. They had trouble caring for their teeth. That's the sign of the worst kind of misery. I rubbed shoulders with these people, helped them, supported them," he said.

The interview extracts came as Hollande was dealt yet another blow — this time in the economic sphere — when his finance minister announced France was once again delaying its target to hit EU deficit rules and revising down its growth forecast.

In an admission made the day his predecessor Pierre Moscovici was named EU commissioner for economic affairs, Michel Sapin said Paris would not get its ballooning budget deficit down to the EU limit of three percent of output until 2017, and that growth this year would be a sluggish 0.4 percent, down from an initial estimate of one percent.

The news is unlikely to boost Hollande, who is already the most unpopular president in modern history as the country continues to struggle with record unemployment and stagnant growth.