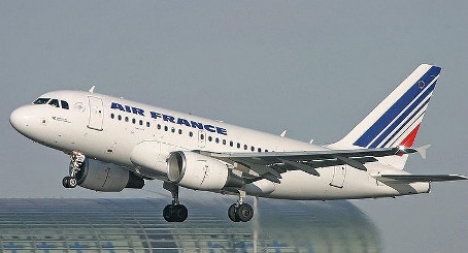 The number of pilots who will actually choose not to fly is very small, according to an Air France spokesperson. Photo: AFP

The pilots’ protest comes just weeks after a trade union representing Air France cabin crew launched a petition to persuade company chiefs to stop flying to Ebola-hit countries Guinea and Sierra Leone until the crisis is under control.

But according to Julien Duboz, a spokesperson for a union representing Air France's pilots (SPAF), the number of pilots who will actually choose not to fly is very small.

Pilots who choose to fly to these destinations “come back convinced of the necessity of being able to fly in safety when they see what measures have been put in place,” Duboz said, according to Le Monde.

An essential way of assuring safety on board, he said, was by taking peoples’ temperatures at the airport as the virus has a very short incubation period.

"There is not a single employee of Air France – locally or flying – and not one of our passengers, whether of African or European origin, who has been contaminated with Ebola," Duboz added.

Speaking on behalf of the airline’s Alter union on Monday, François Hamant said that any pilot or flight attendant who did not want to fly to these countries had permission to do so“without suffering consequences of any nature whatsoever, whether financial or disciplinary”.

The decision was made follow a warning from the Committee for Hygiene, Security and Work Conditions (CHSCT) of “grave and imminent danger” in the West African countries of Guineau, Sierra Leone and Nigeria.

West African authorities are grateful to companies like Air France who have kept flying to Ebola-hit countries, even though they are struggling to find staff willing to operate the flights.

So far, the airline has only suspended flight to Sierra Leone.

According to the latest figures from the Centers for Disease Control and Prevention there have been a total of 3,707 suspected and confirmed cases and 1,848 deaths from the Ebola virus.