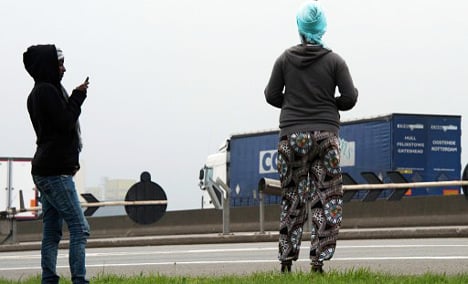 Photo: Migrants wait on the side of the road as they attempt to board trucks heading to Great Britain near the ferry port of Calais on September 5th, 2014. Photo: Denis Charlet/AFP

His comments come after several chaotic incidents in recent weeks in which mainly African migrants were able largely to get around existing fences and security staff in Calais.

The situation in the city, on France's north-east coast, has prompted its mayor, Natacha Bouchart, to threaten to shut down the port entirely.

She has claimed that migrants see Britain — around 20 miles (35 kilometres) away across the Channel — as an "Eldorado" thanks to the way its immigration system is run.

But Brokenshire claimed Britain was not a "soft touch" for illegal immigrants.

"This government has been working hard to restore control to our immigration system, stamping out the abuse that was widespread," he wrote in The Sunday Telegraph newspaper.

"We have long been alive to the challenges posed in Calais, which has been the access point to Britain from the continent for centuries.

"These could replace and enlarge the inadequate fencing at Calais, which is too easy for illegal immigrants to scale."

French police say there are between 1,200 and 1,300 migrants in Calais, mostly from east Africa, looking for illegal passage into Britain.

Far-right groups rallied on Sunday against migrants in the port days after around 85 migrants tried to storm their way onto a ferry to England.

Some protesters carried placards saying "Kick them out!" and others blamed migrants for the "crime, filth and economic disaster" they claim was affecting the town from which hundreds of refugees hope to make it across the English Channel.

In the incident earlier this month, ramps to the ferries had to be raised to stop the migrants boarding the ships after they forced a gate and climbed over fences, overwhelming security staff.

A second attempt to force another entry into the port failed, as 150 migrants gathered around the entrances to the dock.

Newspaper reports show groups of men trying to stowaway in trucks if they slow down or stop near the port. One woman this month claimed she found an illegal immigrant hiding in the back of her car when she arrived home.

French authorities have arrested around 7,500 illegal immigrants attempting to cross the Channel already in 2014.

"We would like to establish secure parking areas where legitimate hauliers and travellers can wait without being hassled by would-be illegal immigrants," he said.