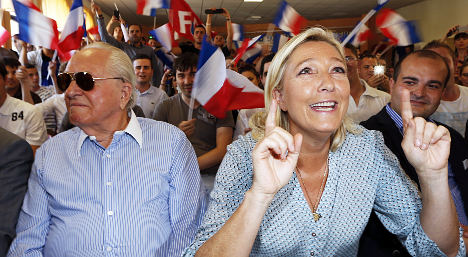 Valls's warning follows weeks of turmoil for the ruling Socialists which culminated in an opinion poll on Friday showing that National Front (FN) leader Marine Le Pen would beat President Francois Hollande in presidential elections in 2017.

The French premier, whose reformist agenda caused a split in the Socialist Party which triggered the current crisis, made his comments in a speech to fellow social democrats from across Europe at the Festa dell'Unita in Bologna, an annual talk-fest in the one-time stronghold of Italy's now defunct Communist Party.

In what will be interpreted as a warning shot across the bows of left-wing rebels inside his own party, Valls said the left across Europe had to change its approach.

"We have to act differently. We have to speak differently," the Spanish-born premier said. "In order to be listened to and to be heard.

"We know what will be the terrible price of failure.

"In France, the extreme right of Marine Le Pen is at the gates of power.

"And I, as a man of the left, will never be able to resign myself to that because it will be the weakest who will be the first to suffer. And it will also be a terrible, perhaps fatal, blow to Europe."

The crisis within the Socialist Party which led to an emergency reshuffle of the government last month has been followed by a string of grim updates on the state of France's flatlining economy.

Hollande's woes have been dramatically compounded by the contents of a devastating memoir published by his spurned former partner Valerie Trierweiler, which depicts him as a self-serving opportunist with no principles.

Far-right groups meanwhile rallied on Sunday against migrants in the northern French port of Calais days after refugees tried to storm their way onto a ferry to England.

Some protesters carried placards saying "Kick them out!" and others blamed migrants for the "crime, filth and economic disaster" they claim was affecting the town from which hundreds of refugees hope to make it across the English Channel.

National Front leader Le Pen's political power base is in the Pas de Calais region, where her party made spectacular gains in the last two elections.

Expanding on his comments, Valls made it clear they were aimed at the dissident wing of his party opposed to his proposals to implement €50 billion of cuts in state spending by 2017 and use part of the savings to reduce companies' payroll taxes in the hope of reversing the upward trend in unemployment, which hit new record levels this summer.

The tensions in the party could come to a head on September 16th, when the Valls government faces a confidence vote in parliament which could — if enough left-wingers side with the right — force the dissolution of parliament.

"Everyone has to step up and accept the responsibility of avoiding an institutional crisis," Valls said.

"When Marine Le Pen is forecast to get 32 percent in the first round of a presidential vote and even win in the second, is that what we need?

"Or do we need to put the country back on its feet?"

Despite the embarrassment caused by Trierweiler's claim that he mockingly referred to the poor as "toothless", Hollande has insisted he will see out his
five-year mandate.

It seems increasingly unlikely however that he will be the Socialist candidate in 2017 given his apparently non-existent chances of winning.

Valls has long been the most popular Socialist politician in France but his chances of winning a selection battle within the party may have been fatally compromised by the bad blood caused by the current crisis, political analysts say.

Although Le Pen is currently forecast to beat Hollande in the event of a second-round run-off between them, the opinion polls also suggest she would lose if faced with former president Nicolas Sarkozy or another candidate from the centre-right.

Trierweiler, who was dumped by Hollande after the revelation of his affair with actress Julie Gayet, meanwhile has escaped the furore in France over her tell-all book by decamping to the Indian Ocean island of Madagascar.