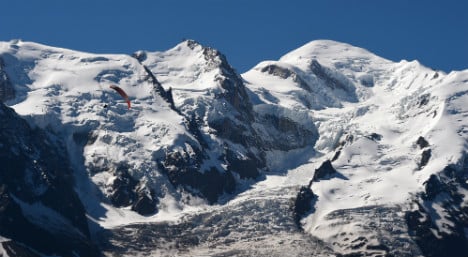 A mountain climber discovered the corpse early on Saturday in the area of the Dent du Geant ("giant's tooth") glacier at an altitude of about 2,000 metres (6,500 feet).

The unnamed man in his forties disappeared in January 2012 after he left alone to snowboard through the White Valley, a famous glacial off-piste route.

"This glacial valley, which connects the Aiguille du Midi mountain to Chamonix, via the Dent du Geant, is particularly dangerous. He must certainly have disappeared into a crevasse," said a spokesperson for the Chamonix mountain police.

About 130 people have disappeared in the Mont Blanc mountain range since 1950. Advancing glaciers and melting snow often lead to the discovery of corpses.