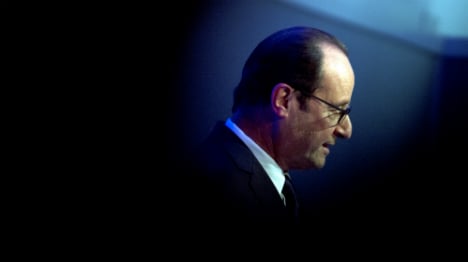 "I will go till the end," he told reporters after a NATO summit in Britain, adding that "I am half-way through my (five-year) mandate and there is no opinion poll, no matter how difficult, that can interrupt the mandate the people give to the president."

For the first time, he hit back at the explosive claims penned by his former partner and first lady Valerie Trierweiler, the most damaging of which was that he secretly despised the poor, calling them the "toothless".

Hollande said: "I will never accept that one calls into question what has been my life's commitment," urging also that "the office of the president be respected".

He said he served "the most fragile, the most modest, the most humble and the poorest" people and that his commitment to the lowest levels of society was his "reason for being".

A TNS Sofres poll released on Thursday and conducted even before the Trierweiler bombshell showed his approval ratings at 13 percent — a historic low.

Only one percent of French people said they had "total confidence" in Hollande "to resolve the problems France is currently facing".

Hollande's loyal Prime Minister Manuel Valls warned before France departed on its long summer holiday that the "rentree" — the return from the beach — would be "difficult", but few could have seen the series of crises the president would have to endure.

Record lows in opinion polls, record highs in jobless lines and then what the French press called the "killer blow" — the vengeful memoirs of his former partner Valerie Trierweiler, who painted him as cold, callous and contemptuous.

"How long will the President of the Republic hang on? The question is a legitimate one," asked centre-right daily Le Figaro, no friend of the Socialist leader.

The first shock came completely out of the blue. One Monday in August, the government suddenly resigned after a weekend of sniping about its economic policy from a now ex-minister who is a figurehead on the left flank of the ruling Socialist Party.

There followed an emergency reshuffle seen as a bid to revive Hollande's fortunes but even this fell by the wayside as just a week afterwards the newly appointed trade minister was forced to resign over irregularities in his tax affairs.

Then came a double whammy of bad economic news. The national statistics office said the French economy had been flatlining for the past two quarters.

Then came Trierweiler's book — another bolt from the blue.

Written and published in the utmost secrecy, the memoir exploded on France with salacious details of a passionate affair, a tumultuous and acrimonious break-up and a power-crazed head of state.

"His popularity is now so low, it's difficult to see how it can get worse," political analyst Philippe Braud told AFP.

However, he added: "I think he will stay president until 2017 (the next presidential elections). Unless, of course, parliament is dissolved", in which case Hollande would likely still stay on but at the head of a left-right coalition.

The next danger for Hollande is on September 16 when the government presents its work programme to a vote of confidence in the lower house of parliament.

Experts believe the vote will pass despite grumblings from a rebellious left-wing of the Socialist Party but the vote is bound to expose further splits.

Losing the vote would be "catastrophic", almost certainly prompt fresh elections and could further boost the position of the far-right National Front, explained Braud, adding that Socialist MPs would likely toe the line for this reason.

Internationally, the next few months will see a host of European summits aimed at pepping up the moribund eurozone economy where Hollande will again come up against a steadfast German Chancellor Angela Merkel as he seeks to push through a more pro-growth agenda.

That's to say nothing of the host of international crises ranging from Iraq to Ukraine that will keep world leaders busy for the foreseeable future.

"I think Francois Hollande has become a scapegoat. He knows that in 2017, he will not be a credible candidate and he can only lose," Braud said.