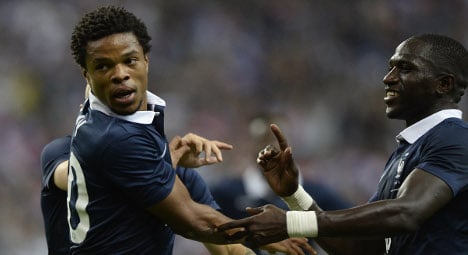 Remy fired emphatically into the roof of the net at the near post in the 73rd minute from a Mathieu Valbuena assist to set France on the way to a win that they will feel they deserved against the deposed world champions.

Missing several familiar faces, including the retired Xavi Hernandez and Xabi Alonso, Spain nevertheless maintained their style of old, controlling large periods of possession but without really threatening to break down the home defence.

France, meanwhile, had the best chances and should have been in front four minutes into the second half, but a clever Karim Benzema finish at the end of a flowing move was disallowed for offside, with television replays suggesting the Swiss officials got the decision wrong.

"It was an even game. They had good quicker transitions, but we had more control of the game," insisted Spain coach Vicente del Bosque, whose team face Macedonia in a Euro 2016 qualifier on Monday.

"The players need more competitive games but we will improve and in general I think we showed we are a good team."

Home coach Didier Deschamps, in the first in a two-year run of friendly matches before they host the European Championship, will be pleased to see his side build on the feelgood factor that came with their run to the quarter-finals of the World Cup in Brazil.

"We were up against a good Spain team with some players no longer there but others coming in," said Deschamps.

"There was a 20-minute spell where they deprived us of the ball, but in the second half we created chances and also scored a goal that should have been given.

"It's good to maintain the same spirit and to mark our return to the Stade de France with a win."

Exactly two months after their 1-0 defeat to eventual winners Germany in Rio de Janeiro, Deschamps sent out a side that showed just one change, with Newcastle United's Moussa Sissoko starting at the expense of Yohan Cabaye.

In contrast, their opponents had three players – defenders Dani Carvajal and Mikel San Jose and midfielder Raul Garcia – making their international debuts and another in David de Gea winning just his second cap in goal with Iker Casillas, ominously, dropped to the bench.

As the captain of the team that won three consecutive major tournaments, including the last two European Championships, watched from the bench, the visitors did their best to subdue a crowd that was close to capacity.

There were spells in which Spain were mesmerising in possession, with Sergio Busquets, the only Barcelona player in their line-up, and Cesc Fabregas featuring prominently, but Diego Costa made little impression up front, just as he had failed to make an impact at the World Cup.

Instead, France had the better chances, Benzema and Paul Pogba both stinging the palms of De Gea in the early stages before the Real Madrid striker rifled a shot towards goal in the 39th minute that the 'keeper was once again equal to.

At the other end, France goalkeeper Hugo Lloris had one moment of panic when a Fabregas attempt from 30 yards took a wicked deflection and looped on to the roof of the net.

Spain lacked thrust and incisiveness, and France showed how it should be done with a lightning-quick move down the right wing in the 49th minute that ended with a cross to the near post being back-heeled into the net by Benzema, only for the offside flag to curtail the celebrations.

The always-lively Valbuena fired narrowly wide but it was he who set up the goal for Remy, cutting the ball back from near the byline on the left for the new Chelsea striker to convert his fifth international goal.

Substitute David Silva almost equalised with seven minutes left but that would have been harsh on a France defence marshalled by the supremely athletic but youthful duo of Raphael Varane and Mamadou Sakho.