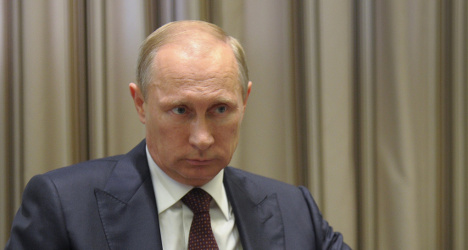 Marine Le Pen certainly isn’t afraid to say what she thinks, even if that means expressing respect for the man who has been accused of backing a bloody rebellion in Ukraine.

In an interview with French daily Le Monde, the head of the anti-immigrant, anti-European Union National Front party said of Putin: “I have a certain admiration for the man. He proposes a patriotic economic model, radically different than what the Americans are imposing on us”.

Her comments come as France has suspended a €1.2 billion deal for two Mistral-class warships until Russia has committed to a ceasefire in Ukraine. On Friday Hollande said he would wait until October to decide whether to cancel the deal.

It’s the latest sanction against Russia since the country annexed Crimea in March. A wave of fresh sanctions is still under consideration by the international community.

Though in Le Pen’s view some of the world’s most powerful leaders are responsible for the fighting in Ukraine, telling Le Monde “the crisis in Ukraine is all the European Union’s fault. Its leaders negotiated a trade deal with Ukraine, which essentially blackmailed the country to choose between Europe and Russia”.

Amidst the turmoil in Ukraine and the current upheaval in France’s politics, she dropped a reminder that she is ready to take over the reign's of the government at a moment’s notice.

“I’m ready to be prime minister and implement the policies that the French are waiting for,” she said. “Hollande would be the president for representation and inauguration ceremonies, but that’s it. The government decides the policies and the political path to follow. He would have to submit to it or he would have to go”.