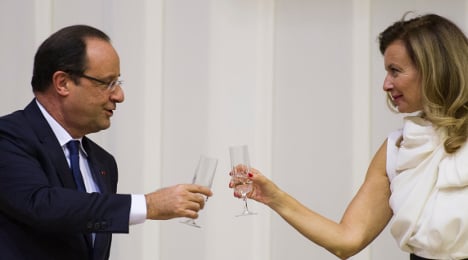 In her new kiss-and-tell book "Merci pour le Moment" (Thank you for the moment) , Valérie Trierweiler recalls her nine years with the president, and her life as France's unofficial first lady.

Trierweiler says she wrote the book, which was released on Thursday and already tops Amazon's bestseller list, because she wants people to know the truth about Hollande, and she is not soft on the president.

The Local has picked out a selection of the juiciest extracts, which continue to cause a storm in France.

On finding out about Hollande's affair with actress Julie Gayet

“The news about Julie Gayet is making the headlines. I crack up. I don’t want to hear about this, I rush into the bathroom. I grab a little plastic bag which contains sleeping pills. François has followed me and tries to take the bag away from me. I run back in the bedroom, he manages to grab the bag and rips it apart. Pills fall on the bed and the floor.

"I manage to get some of them and push the ones I can into my mouth. I want to sleep. I do not want to go through the next few hours. I feel the storm coming at me, and I do not have the strength to fight it. I want to run away. I faint."

Once, before a state dinner organized by the Elysée, Trierweiler tells of a particular comment, made by the president, that hurt her: “Does it take you a lot of time to make yourself look that beautiful”? To that she answers “yes, a bit”. The president then coldly remarks that “anyway, nobody expects any more from you than looking pretty”.

The former “Première Dame” also adds that the president often made fun of her family, and her modest background, calling her “Cosette” (the poor orphan in Victor Hugo’s literary classic Les Misérables).

She also felt insulted when he told Valérie that her family was “pas jojo” (a familiar expression to say her family was not a pretty sight to see). Trierweiler was raised in a poor neighbourhood of Angers, western France, by her disabled father, while her mother worked as a cashier in an ice rink.

She writes: “He portrays himself as a man who doesn’t like the rich. But in reality, the president does not like poor people.

She continues: “Him, a man of the left says in private 'les sans-dents' [the toothless], very proud of his humour.”

The right to see Hollande

Trierweiler also said she was shocked by the lack of privacy the couple had. She talks of political meetings that were held in their bathroom and says that during the 2012 presidential election campaign, the now agriculture minister, Stéphane Le Foll, one of the president’s closest allies, had told her that if she wanted to spend an evening with Hollande, she had to ask him first.

On the DSK scandal

She describes DSK as a cynical man, blinded by his ambitions. The night DSK was arrested in New York, she remembers: "I woke [François] up; 'I’m telling you, something terrible has happened. American newspapers say Strauss-Kahn was arrested on a rape charge'.

"François sat up on the bed, against his pillow, and grabbed his iPhone. He does not stop for a moment to think about DSK, he is already thinking one step ahead. 'This is not good news. This will add more legitimacy to Martine Aubry,' he said." Aubry was Hollande's main rival to be socialist party candidate for the presidency.

With one passage, Trierweiler may create tensions between the president and his foreign minister. “François believes that Laurent Fabius has wasted his life, because he has never been president. I told him it did not mean that Fabius was unhappy; he seemed happy with his position and with his wife. I asked François if he was happy and he answered 'no'."

Hollande tries to win her back after break-up

Trierweiler writes: “He still tells me he needs me. Every night, he asks me out to dinner. He says he wants me back, at any price. He talks about love, he says I’m all his life, that he cannot go on without me. He texts me, sometimes up to 29 times a day. Does he believe what he writes? Is he just acting like a spoilt child, who cannot bear to lose me? He says he will win me back, as if I was another election”.

The jealousy between Segolène Royal, the first partner of the president, and Trierweiler is well known. In her book Trierweiler talks about a dinner at the restaurant, which went badly.

“François and I are talking, we are laughing. Suddenly I see Ségolène Royal entering the restaurant, walking towards us. François’s back is turned, he does not see her.

"I warn him and he thinks it is a joke until she sits down at our table. She is cold and tells us she hopes she does not disturb us. François seems completely unable to speak so I answer 'we were talking about the Tour de France'. Ségolène barks 'stop bullshitting me'!"

On 'jealous' Michelle Obama and her own jealousy

Trierweiler writes: "Michelle Obama seemed upset, which made me like her even more. I’m so glad I’m not the only one to feel jealous. Yes I am jealous, like with every men I love. I do not know how to feel differently with the men I love”.