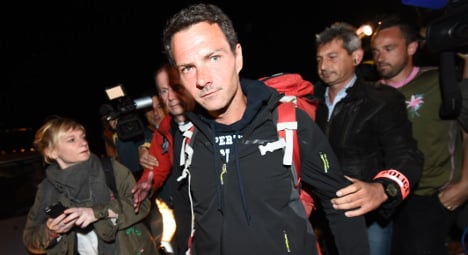 Rogue trader Jérôme Kerviel is to be released from prison. Photo: AFP

Jérôme Kerviel, the French "rogue trader" who lost one of Europe's biggest banks nearly five billion euros with wildly risky bets, will be freed from jail on Monday, his lawyer said.

The Paris appeals court ruled that the 37-year-old  can be released from a prison just south of the capital and placed under supervision with an electronic bracelet, David Koubbi told journalists.

Kerviel, was convicted after his high-risk trading cost his former employer Societe Generale nearly €5 billion and brought one of the biggest banks in Europe to the brink of bankruptcy.

He was originally sentenced to three-years behind bars but will, in the end, only serve around 100 days.

Before being locked up in May Kerviel, 37, had spent two months on a walk from Rome intended to raise awareness of what he regards as the unfair treatment he has received from the courts.

Kerviel embarked on the walk after meeting briefly with Pope Francis on February 19 and he was still in Italy a month later when France's top appeals court upheld his 2010 conviction for breach of trust, forgery and entering false data. He was arrested after crossing the border into France.

Although the March court ruling upheld Kerviel's sentence – a five-year prison term with two suspended – it cancelled an order for the former trader to pay back the money he lost and ordered a review of the damages award.