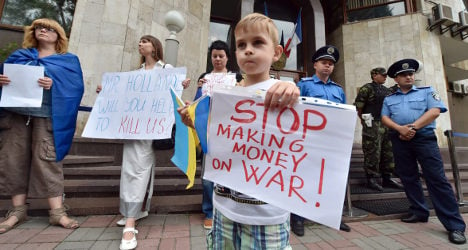 France got some kudos for suspending a deal to sell warships to Russia. Photo: Sergei Supinsky/AFP
Leaders in the United States and the Baltic republics have voiced support for France's decision to hold off delivering the ships while the crisis in Ukraine is underway, while Russia said it considers the delay no great "tragedy."
American Defence Secretary Chuck Hagel said the delay was "pretty significant", and added it was another example of how Russia's actions were isolating it from the international community.
A US State Department spokeswoman echoed his statement by saying it was a "wise decision."
British Prime Minister David Cameron's office has yet to comment, but he previously called the agreement with Russia "unacceptable."
France has been under enormous pressure from the United States, Germany, Britain and others to scrap the deal over Russia's involvement in the fighting in Ukraine.
Though the €1.2 billion deal was inked in 2011, it has been repeatedly condemned as international concern has grown about Russia's apparent sponsorship of anti-government forces who have captured parts of Ukraine.
Early Wednesday night, on the eve of a NATO summit, France said the deal is now in doubt.
"The conditions for France to deliver the first warship are not in place," President Francois Hollande wrote in a statement. "The recent actions by Russia in eastern Ukraine are contrary to the basic notions of security in Europe."
Russia's neighbors in the Baltics also cheered France's choice.
"We welcome France's decision. It is in line with Lithuanian interests," Lithuania's defence minister Juozas Olekas told AFP.
His comments were echoed by Latvia's foreign minister Edgars Rinkevics who said on Twitter that the move by Paris was the "right decision and right time".
The Russian actions in Ukraine have rattled nerves in Lithuania and fellow Baltic states Latvia and Estonia, which were under Moscow's thumb before the collapse of the Soviet Union in 1991.

For its part, Russia downplayed the significance of the deals's suspension.

"The Defence Ministry doesn't see any tragedy in this. Though, of course, it is unpleasant and lays certain tension on our cooperation with the French partners," Deputy Defence Minister Yuri Borisov told Russia's state new agency. "But a rejection of the contract won't be any tragedy for us in regard of the rearmament plan."