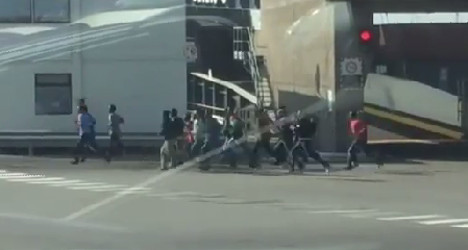 Migrants storm the port of Calais in a bid to get onto a UK-bound ferry. Photo: HereComesMeNews/YouTube
At least 34 additional riot police will be posted at the port for the next 10 days in response to the hundreds of migrants who overwhelmed security forces and tried to push their way onto UK-bound ferries on Wednesday.
Walkways on to the ferries had to be raised to stop the migrants boarding the ships after some 85 forced a gate and climbed over fences, overwhelming security staff.
A second attempt to force another entry into the port failed, as 150 migrants gathered around the entrances to the dock. It forced the ramps to be closed for between 10 and 15 minutes while police rounded the migrants up.
The port has long attracted migrants who hope to stow away on trucks of boats bound for the UK, which some migrants believe has more generous policies toward new arrivals.
The result is over a 1,000 migrants are living in makeshift camps close to the port that lack basic sanitary facilities and hygiene. France has raided the camps twice in recent months, but it has done little to drive away the migrants.
Because the migrants are trying to smuggle themselves across the English Channel, the tumult at the port has become an issue of international diplomatic issue for France and Britain. The French have repeatedly called for stepped up assistance from the UK, while not much help has been forthcoming.
Calais Mayor Natacha Bouchart, an immigration hardliner, threatened this week to force a shutdown of the port  in order to get the attention of UK policymakers.
"It would be illegal," Bouchart admitted, "but today I want to make a strong gesture towards the British."
The mayor took issue with British immigration policy which, she complained, is "considered as an El dorado" by immigrants who have again flooded into the northern port over the summer.
Police said they are now between 1,200 and 1,300 migrants in the town, mostly from East Africa, and there have been a number of confrontations around the port in August.
A spokeswoman for the UK Home Office told The Local that despite the ongoing crisis British authorities have made efforts to improve security.
"We have, for instance, upgraded vehicle scanning equipment with the latest technology to detect people hiding in lorries and tankers and have increased the number of body detection dogs stationed at Calais," the spokeswoman said.
"We will continue to bolster security, and the Home Secretary met the French Interior Minister Bernard Cazeneuve last week to discuss this important work.

"The ramps to the ferries were immediately raised when a number of migrants entered the port on Wednesday, and none of them were able to board.

"The incident was quickly brought under control and the French police apprehended all those involved. All freight vehicles inside the port at the time have been rescreened by Border Force.”