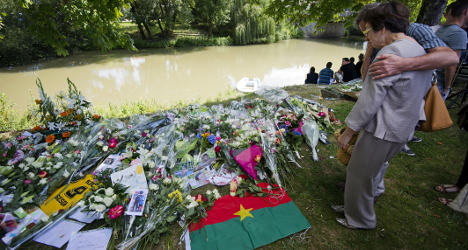 A French burglar targeted a family's home after learning they were killed in the Air Algerie crash. Photo: Jean-Sebastian Evrard/AFP

The young man got a call from his mother with horrible news around 10:30 am on July 25: a local family, five in total, were among the 116 people killed when an Air Algerie flight crashed in Mali.

It wasn't quite 11:30am by the time 19-year-old, named only as Florian, was inside the home of the deceased Ginest-Lejeune family and was stealing their possessions.
He grabbed three computers and some computer accessories from the family house in the town of Sainte-Feyre, central France before escaping with the loot.
But later in the day Florian decided to make a second pass at the house, which he'd likely visited in the years he had known the family, only this time when exiting the home he bumped into a neighbour.
Panicking, Florian stashed a computer he'd taken during the second burglary and took off on his scooter. However, someone saw him and thought he was suspicious enough to jot down his license plate number.
That information led police right to Florian and he was due in court on Thursday, where he's expected to describe his intense regret over his crime. He's already confessed to police.
"He's expressed a lot of regrets and sincere repentance for the acts of which he is accused," his lawyer François Mazure told French daily Le Parisien. "He's well aware of the psychological suffering he caused to the victims' family."
For their part, the victims' relatives considered the crime, "pitiful and appalling."
The crash remains under investigation and it will likely progress slowly due to extremely fragmented state of the plane. Though authorities have already said repeatedly bad weather appears to have played a role in the crash.