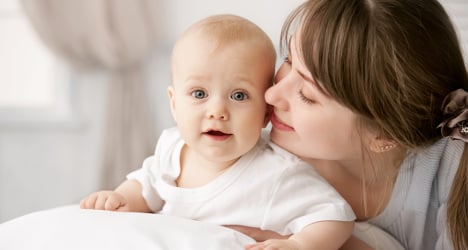 Women in France are having kids much later in their lives and less of them, it seems. Photo: Baby.
The mothers of the 811,510 babies born last year in France were on average four years older than the women who'd borne them nearly three decades earlier.
New data from France's national statistics agency INSEE show the average age of a new mother in 2013 was 30.3 years old, compared to 26.1 in 1975. Driving home that trend was the fact France also saw it's oldest group of mothers in 67 years.
Some 17 percent of babies were born last year to mothers who were 35-39 years old. That age group had seen decades of fluctuation in birth rates since the 1940s, but has climbed steadily since 1990 to a record high in 2013.
The statistics showed fathers were about the same age, on average, as the mothers, with some 70 percent of the babies born to dads who were 30 or older. It's a trend that is popping up world wide as people establish careers before turning to family life, but also put off setting up households due to a lousy economy.
While older, most of the new parents weren't married. About 57 percent of France's babies in 2013 were born out of wedlock. That is no surprise as the French have increasingly been turning toward civil unions.
About two unions are performed each year for every three marriages in France, INSEE says. The unions carry the tax, immigration and legal benefits of being married, but don't not the traditions and expenses of a wedding.
Finally the French are producing fewer kids. The Local reported in January the number of births had dropped below the symbolic rate of two per Frenchwoman.
An explanation of the drop in births is complex, but the mix likely includes the record high unemployment and near zero growth presently emblematic of the French economy.

“The choice to have a child depends on family and work plans, but can also be influenced by the economic climate,” INSEE Head of Demographic Studies Pascale Breuil said.

Despite the drop in birth rate in 2013, France remains second only to Ireland when it comes to Europe's most fertile nations. Women in Ireland, where the population is 4.6 million, had on average 2.01 children each in 2013.

These figures stand in stark contrast to Germany and Portugal, which had the lowest fertility rates on the continent. Germany recorded a rate of 1.38 per woman, followed by Portugal with 1.28 offspring per woman.

Germany is also an important reminder that the economy isn't the only factor for a couple weighing parenthood. Germany has single-digit unemployment and is considered the economic powerhouse of Europe.